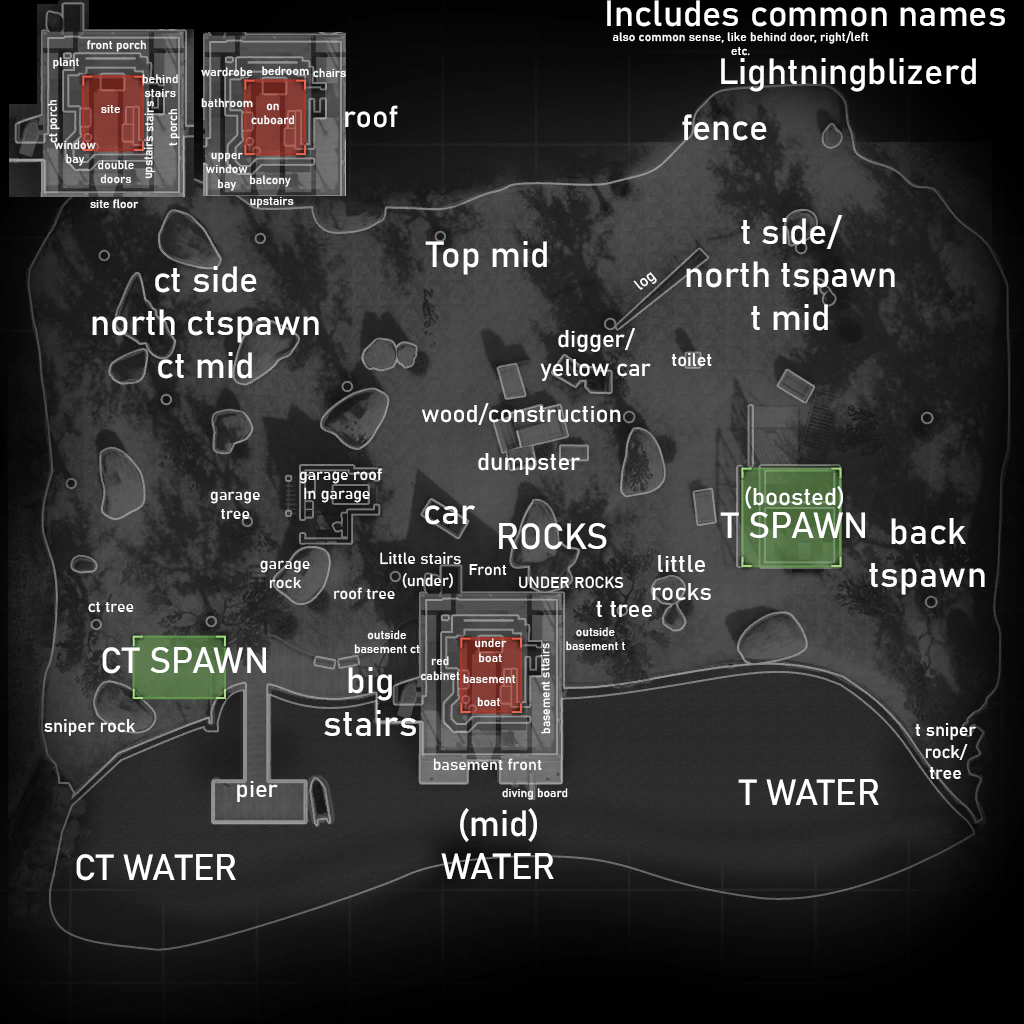 This guide will showcase the cool secrets (unknown if intentional), general tactics and how to win on the lake map in the wingman mode.
Hopefully this guide will bring some light to the under played mode/map and possibly change the way people play.
Winning is not all about aim.
You need to know what to do in what situation in what map, how to approach and use the map to your advantage.
This is especially true on lake.
It becomes very easy to win if you always distract the enemy and suprise them, or even if you let your team use you as bait.

The classic jump - garage roof to house roof.
Very useful to surprise enemies, sometimes allowing a sneaky knife especially with lower ranks.
(Can be done with little noise when landing) You can also do it in reverse, or hide there if the bomb is down around there.
(Claim) A sometimes useful jump onto the tree behind garage.
If you go to the back and jump onto the left branch, you can see t spawn and some of outside.
Useful if the bomb is dropped in t spawn and you have a sniper because you are very hidden - no one will check there.
A useful jump as t or ct - you can open the door on site facing t spawn, and you have a view into the site and kill them while planting, or defusing.
(Claim) You can strafe jump into ALL of the upstairs windows.
I think this is by far the most difficult jump.
Jump around the middle and strafejump (let go of w as soon as you jump and just hold a or d and move your mouse left or right depending on where your going, or if you will be strafing multiple times.
) Common t-spawn boost for snipers done at the start of the game: A set of jumps in t-spawn to get into a tree to be camouflaged when sniping A useful jump to hide in upstairs and easily win the round.
You can also use it to fake a drop down when the enemy is planting so they stop and look.
Very effective as it makes the same sound as dropping down would.
A jump onto the top window of the upstairs window bay / roof connector.
Useful to see the planted bomb in more angles (credit to Lewis_s55) Roof to the balcony.
Alternate way of getting off from roof into upstairs, can suprise knife enemies sometimes.
A not very useful boost onto the window or door of balcony.
You will be easily spotted there but gives more angles.
You can two man boost into nearly all of the trees but they are not especially useful unless the bomb is dropped near.
You can also two man boost to quickly get onto the roof or the balcony.

Illegal grenades are ones that shouldn't really work, but do because of clip through bugs.
I bet there are still some ones to be discovered.
(a quick test to see if a grenade would land on an object, is to shoot at it and see if the bullet goes through it or leaves a mark on it.
(sv_showimpacts 1) If it does, a grenade can usually go on top of it.
) Some of theese can be very deadly used together.
The molotov to use when you have time and you planted in a specific spot.
In the very top, middle edge of the site near the double doors the fire clips through and the defuser takes damage (cancelled out by smoke) You can obviously also use a smoke but its not worth it because it doesn't cover your head.
(Left click throw) (Claim) Another molotov to kill the diffuser if you plant in the very bottom right side (Left click throw) (Claim) A molotov to use when someone is hiding in the bedroom (First upstairs room.
If they are low hp they are 80% dead) (Left click throw) (Claim) You can get molotovs on top of all doors.
Some are better then others: Molotov from double door to upstairs balcony and window bay (op?) Molotov from ct site door to bathroom.
Only usefull if you know someone is hiding there.
Molotov from t side door to upstair chairs.
Many people hide there and this can be very effective.

Key Features Everything in the house is penetrable, you can shoot through all the wooden walls if you are confident enough.
Do not overuse the same position too many times Be unpredictable Do not care about people calling you an idiot if you use a scoped AR on this map.
It is a huge advantage for long distance fights.
Use any weapon you want to use.
Watch the rounds.
I still do not understand people who do not spend all their money on the last round on a better pistol or more grenades.
Just buy everything you can - you do not loose anything.
Pistol roundCT side Most people on the CT side tend to go to the garage or outside, and one house.
Some also both buy grenades and throw them to the rock.
If the terrorists have no armor it deals serious damage: So while my teammate is outside, i break some windows with my knife to get back in silently.
If the terrorists rush along the rock, they will be visible in the window im looking at soon.
I can also quickly peek the basement stairs.
While my team is covering my back and watching if they go from water, its a dropped bomb at the t side site door and i go to the tree, watch the bomb and kill them - its an easy walking target.
T side To combat the CT in garage, i used to go outside or rush mid and score an easy kill while the low rank ct is overwhelmed by 20 bullets being shot at him, but in high ranks i usually go water and rush the basement like this I could kill delayed CT's or ones that were going basement.
Once the outside CT is gone or both are in I would go up the big stairs: (I would also do this as a CT on smg rounds) Second RoundEven if it is a loss with 0 kills, I usually never eco.
As T i can always buy armor and mac-10, and as a CT i always buy kevlar+helmet with a defuse kit.
It is crucial to have these items.
If its a win i do the same but with better weapons (MP7 and MP9 are a favourite and a must-have smoke grenade for both sides) Buy RoundCT side If i ace both the first two rounds sometimes I would get an AUG or M4A1-S (silencer is important if you want to stay hidden in trees, also consider buying camouflage skins like Flashback, as they make your weapon look green and you actually blend in better).
I would go outside and quickly kill the terrorists either both rushing the rock or if one goes outside.
I use the rock left to the garage for cover.
Do not do this too many rounds in a row as they will remember to kill you first.
Depending what position the enemy is in, I would use the appropriate jumps and grenades.
The key to winning is being unpredictable.
T side It depends on info from the previous round.
If there is a sniper I would just tap my ak until he is dead, and go onto the roof from the tree.
If there is no sniper I would still just go outside and pick them off from there while they are vulnerable with sometimes shotguns and smgs after round losses.
RushingBoth sides can use smokes to rush into the house, the T's can smoke the rock and the site and quickly plant: The CT's can smoke the stair window and rush upstairs and camp the chairs with smgs/shotguns: SpawnpeeksCT As a CT you can buy a sniper and go to the spot shown in the GIF, and just snipe the terrorists down.
You can also go to the garage or garage rock to kill them.
T If you spawned in the top right, you have a chance to kill house-rushing CT's, and a spawnpeeking sniper by jumping onto the wooden stack and killing delayed CT's through the gap in little stairs.
The BombTo plant I would smoke the middle of the site, and actually plant in the clear part of the site.
The enemy will just spray the smoke and my teammate will just kill him.
I would plant in the smoke if i am vulnerable (1v2).
Then i would just rush the basement, and camp there and molotov when i hear the defuse sound.
After that I would go up the little or big stairs and kill them if they retreat.
Personally i do not do this but after planting you can take a negev or anything good for penetration ( ͡° ͜ʖ ͡°) and just shoot to the area where you planted the bomb.
You can test this before.
To defuse I would smoke and flash, so the terrorist is disoriented and starts missing his shots.
With a defuse kit and smoke this is always a guaranteed defusal.
If i am hiding upstairs and i hear the bomb plant noise, I would drop from the cupboard faking a drop down so they check.
On the second plant i drop down really.
Dropped basement bomb: I would hide in the water inside the basement - if people's brightness is low they will not see you there, and they also do not check.
If they are walking in from the open side for the bomb they are almost always dead.
After you kill one move because the next will check.
Object advantagesYou can shoot the pictures to cover the planted bomb so the enemy cannot actually find it, or cover the basement to site entrance while you see incoming enemies but they do not see you. 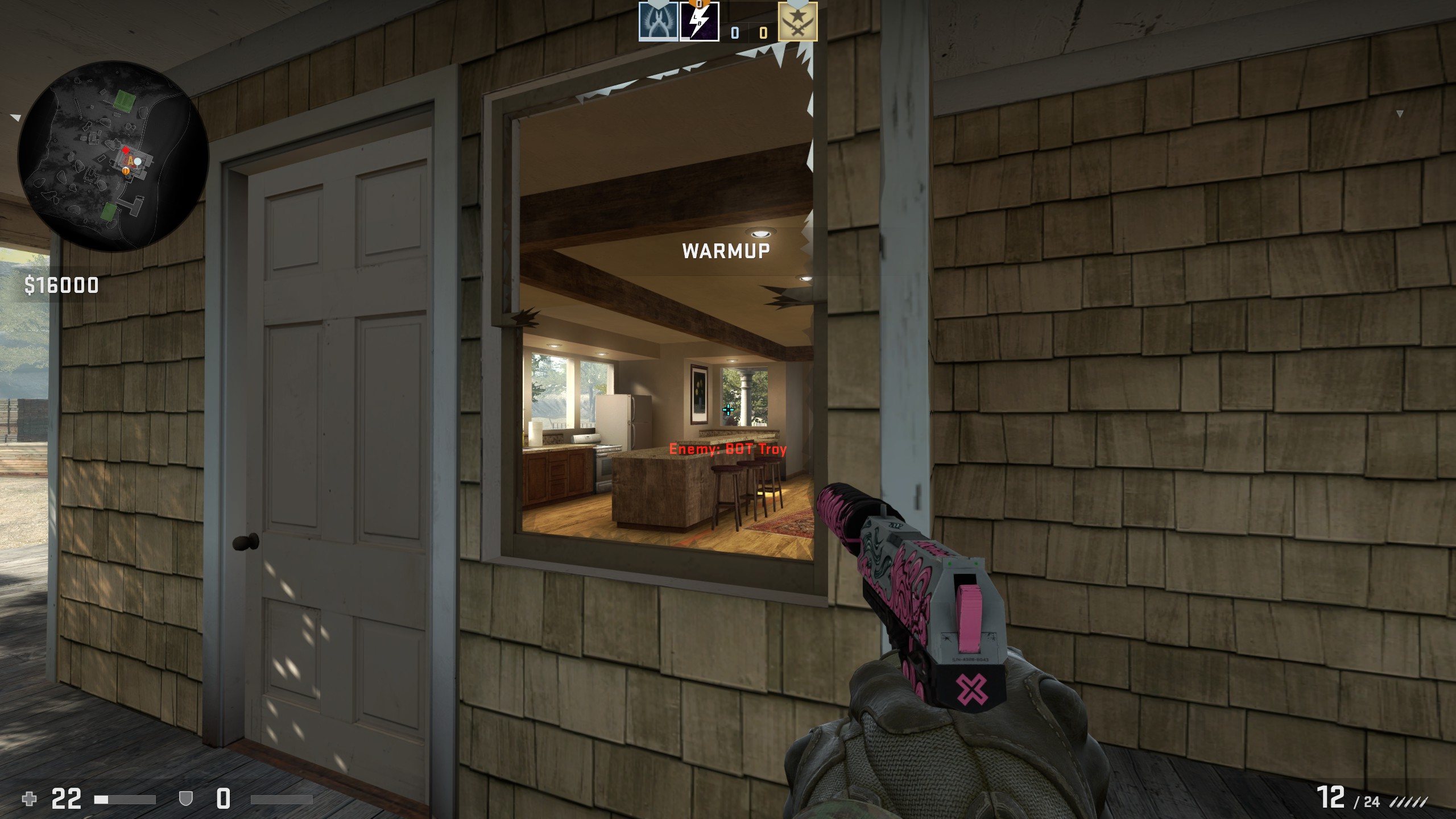 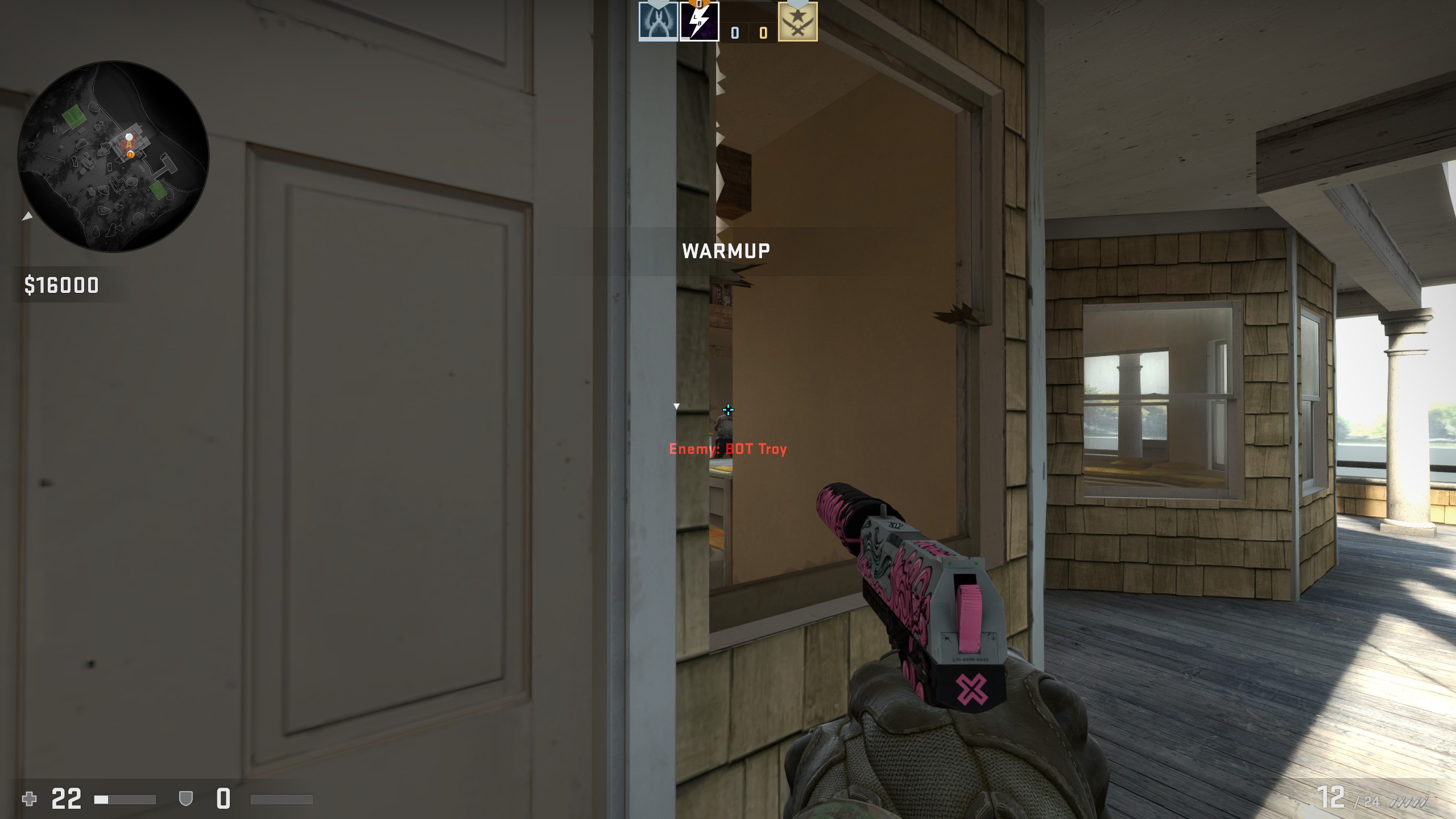 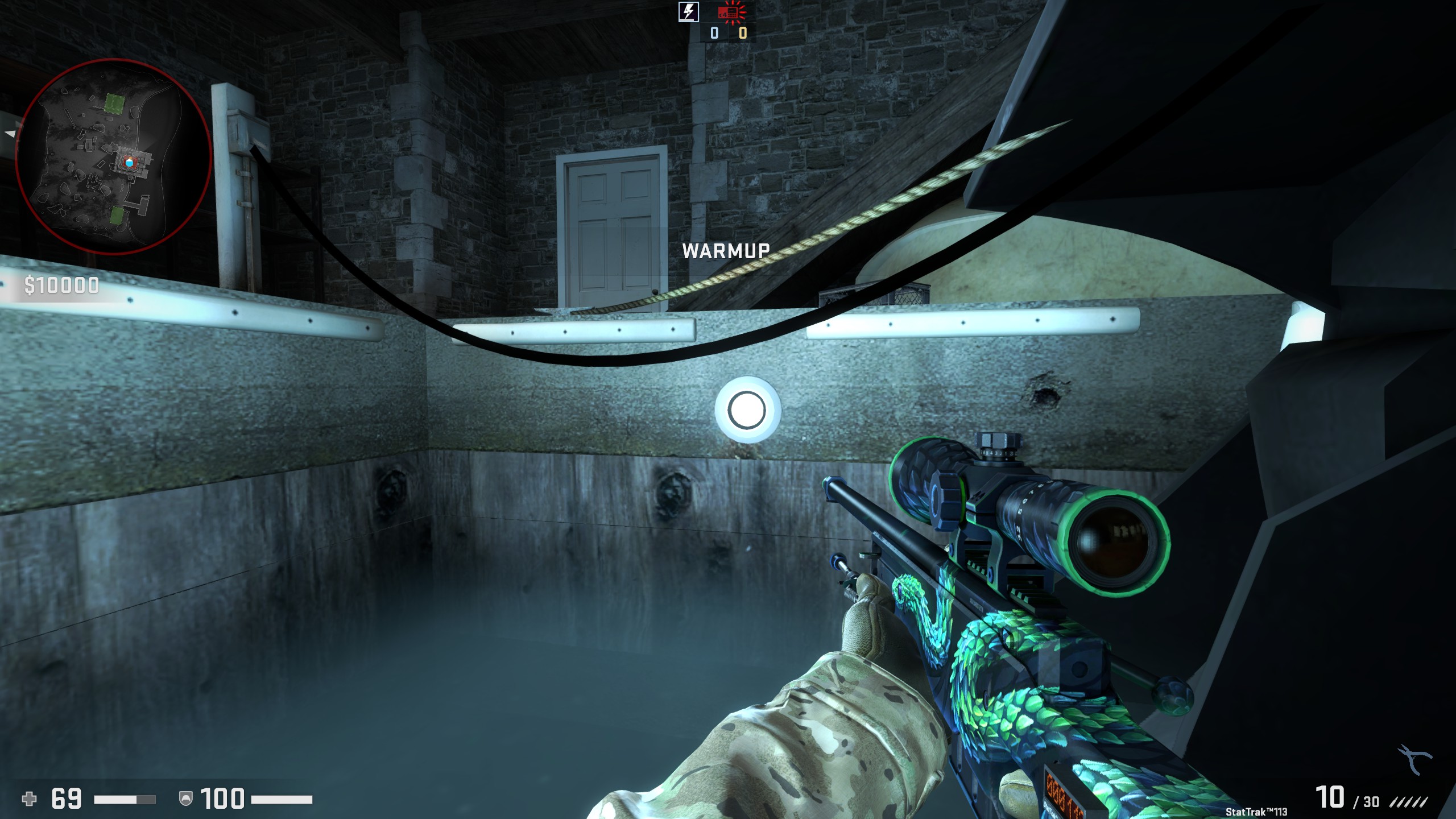 You can fall from the roof with no damage (claim) There is one way graffitis on some windows.
One is the window next to the upstairs stairs.
You can graffiti it as terrorist in warmup or ct last round for your advantage - you can see through it but people on the other cannot.
But you can shoot it out of course.
All graffiti is one way, and it will still be on the window next round even if it is broken.
Molotovs clip through EVERYTHING such as the floor, going on to the next floor allowing for overpowered molotovs (for example go to grenades section) (insignificant) There is a hole in the chimney in t spawn - you CAN get up here legitimately (insignificant) As a CT, sometimes when you spawn you bounce up and down forever until you jump (this time i was really high, on tree level, first time ever that happened in around 1000 games total, but easily fixed by jumping once) (insignificant + claim) Molotovs sometimes do not work behind T spawn, they go through the ground or light the sky on fire (insignificant + claim) If you shoot a door enough times it draws a purple/pink square: 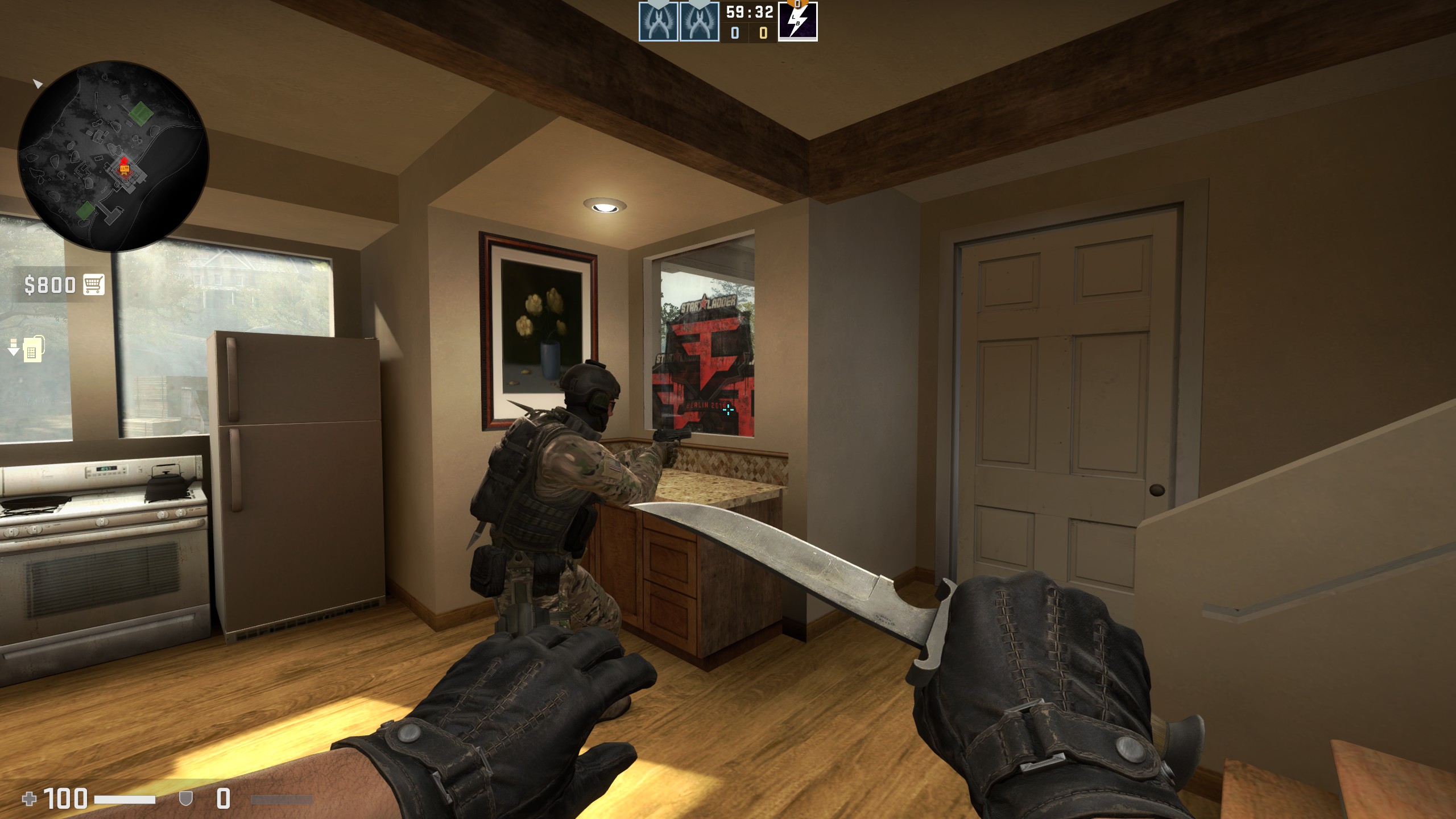 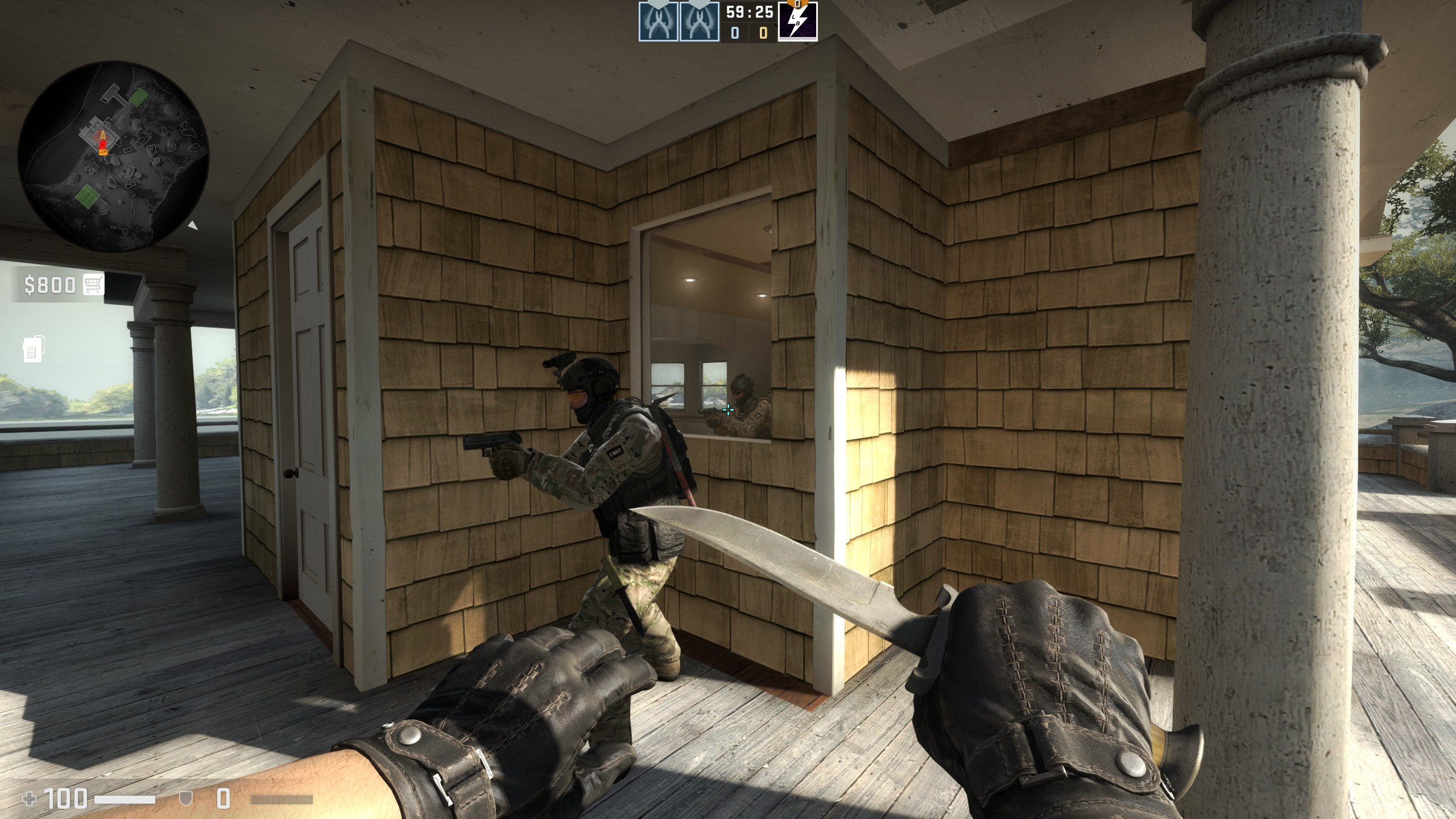 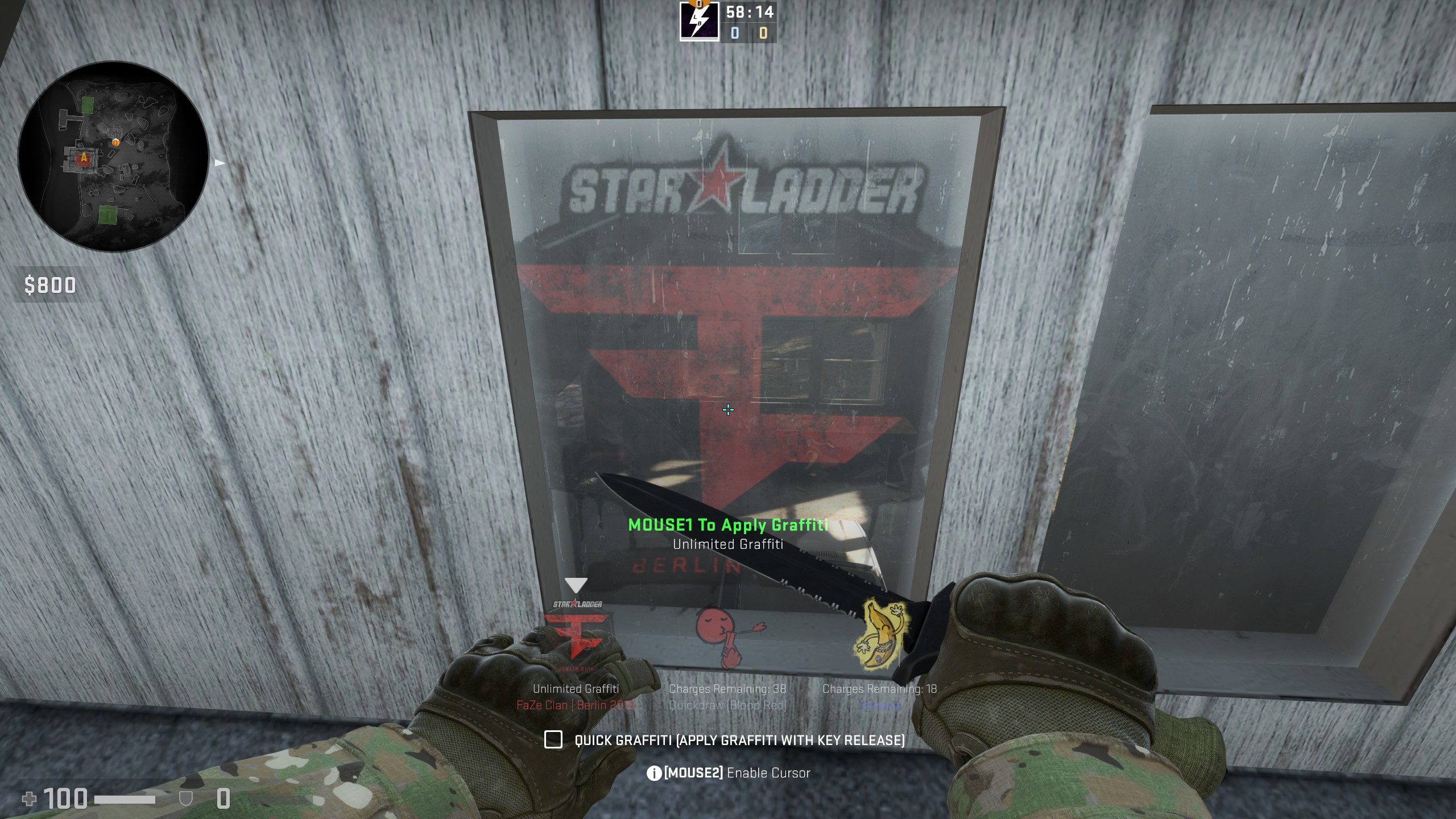 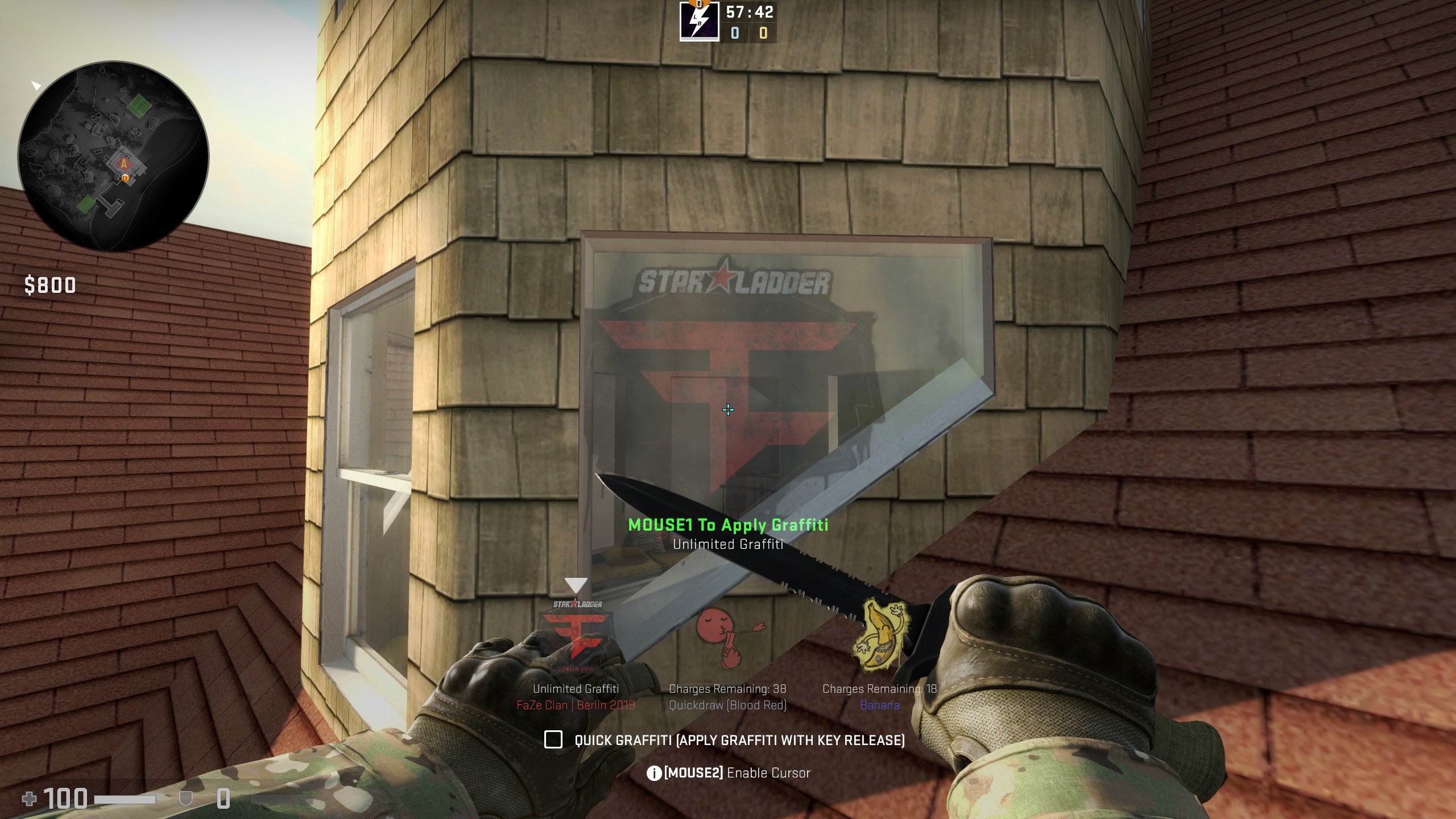 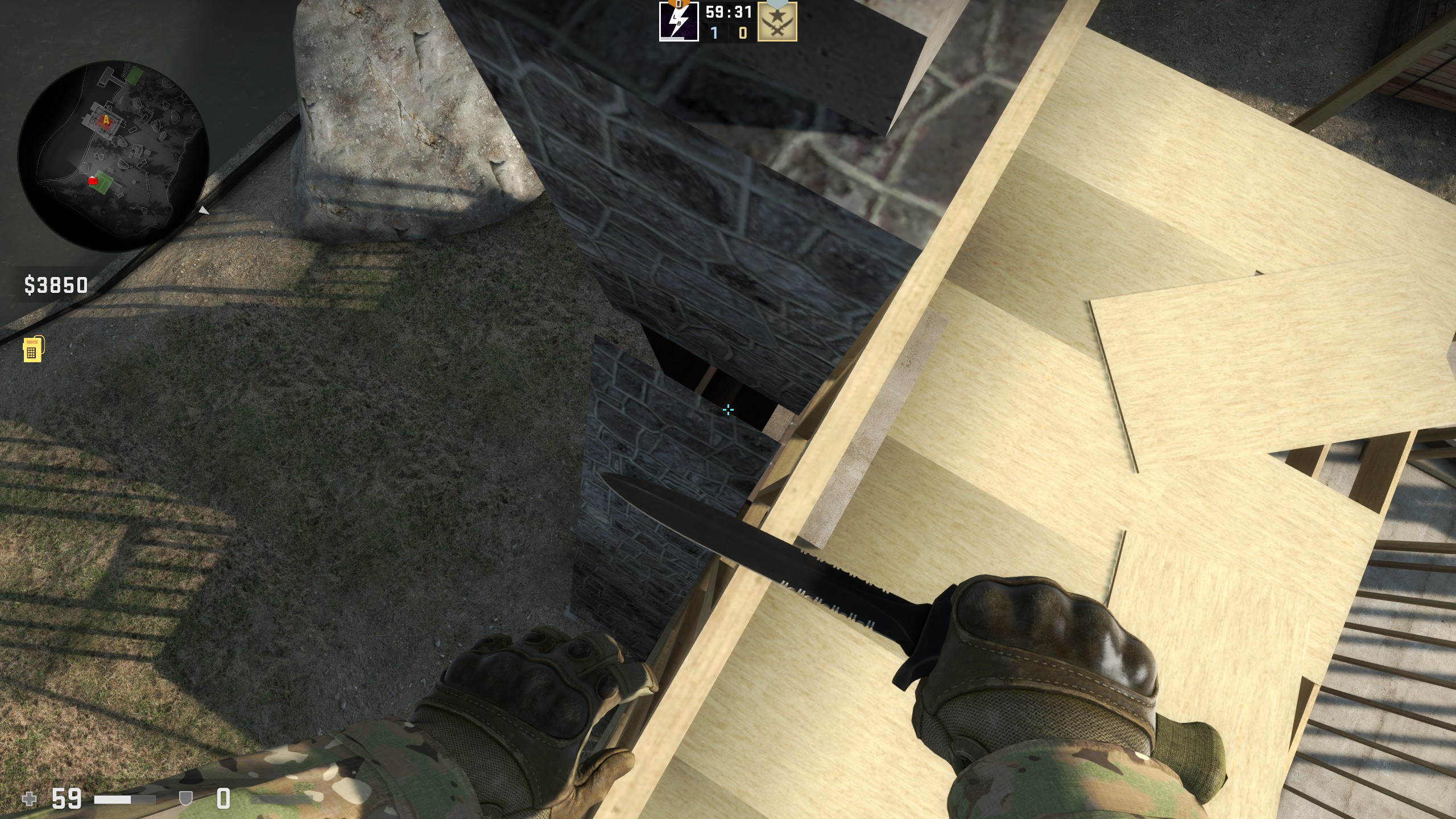 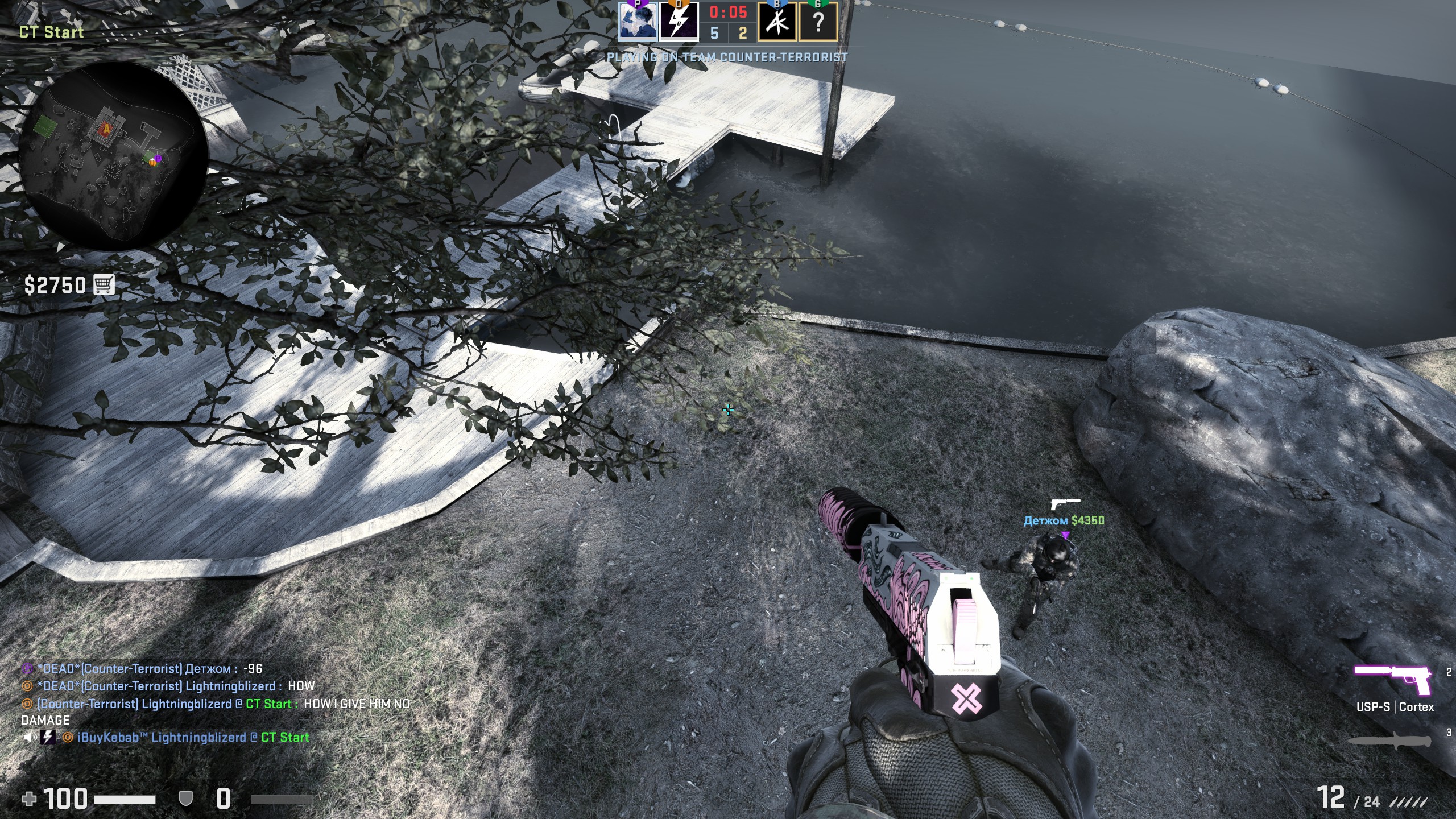 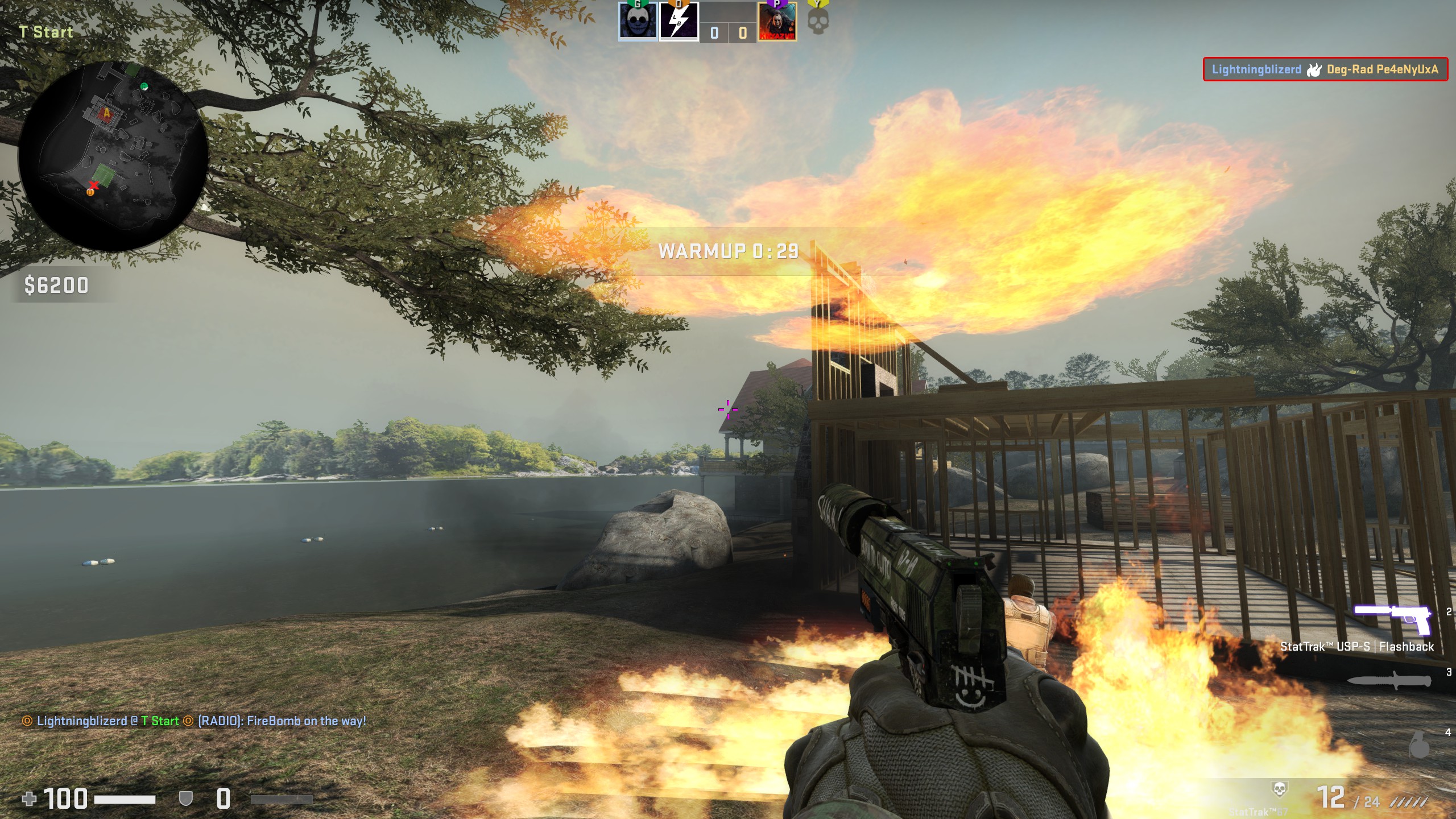 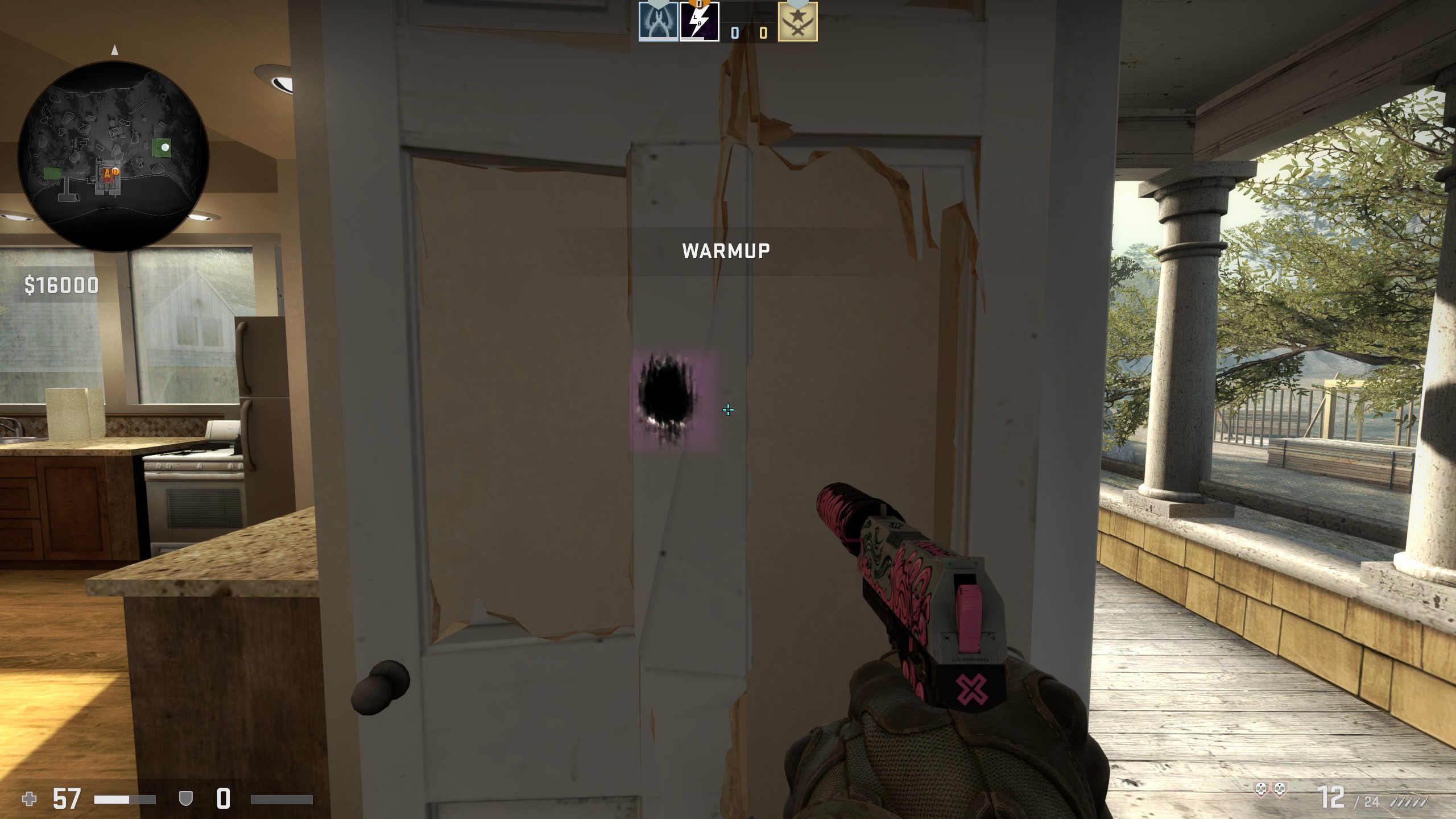 Thank you for reading this guide, it took a long time to make and it would be very helpful to rate, favourite and share so more people see this guide <3 If you need help with anything on this map I can show you ingame, just leave a comment on my profile.
https://steamcommunity.
com/tradeoffer/new/?partner=192112608&token=ZzOiFsZ0?partner=192112608&token=ZzOiFsZ0 Thank you! and valve, please don't fix.
.