Valve Anti-Cheat, abbreviated as VAC, is an anti-cheat software developed by Valve Corporation as a component of the Steam platform, first released with Counter-Strike in 2002.
During one week of November 2006, the system detected over 10,000 cheating attempts.
As of July 2014, it is estimated that over 2.
2 million Steam accounts have been banned by the system.
When the software detects a cheat on a player's system, it will ban them in the future, possibly days or weeks after the original detection.
It may kick players from the game if it detects errors in their system's memory or hardware.
No information such as date of detection or type of cheat detected is disclosed to the player.
After the player is notified, access to online "VAC protected" servers of the game the player cheated in is permanently revoked and additional restrictions are applied to the player's Steam account.
Steam Support about VAC ---I have allocated several sub-themes: How do I report a new cheat? If you know of a new cheat, especially private cheats (ones that aren't on a public website), and can provide the links or the actual binaries, please send an email with pertinent information to the following email address: vacreview@valvesoftware.
com All emails are read and reviewed by the VAC development team.
--- How do I report a cheater? If you believe to have played with or against a cheater, please follow the instructions in the Reporting suspected cheaters FAQ to report the suspected cheater.
Note: Users are not VAC banned based on reports alone.
Other factors are taken into account before VAC bans are issued.
--- What games are VAC enabled? A list of VAC enabled games can be found on the Steam Storefront by clicking here. 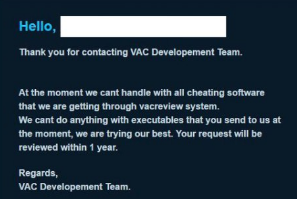 • How VAC works I have found some information at a forum: Then main VAC scan module runs when your connected to a VAC secured server.
When your connected to a vac secure server, vac scans for:  • Games memory for known cheat signatures (MD5 hashes)  • It checks running processes, traces their file location and hashes them for known cheat    signatures  • Scans game directory for material wall hacks (or other modifications to the game files) If you receive a ban on one game engine, then bans automatically pass to games which with the same engine.
• Competitive reports  • If the person has sent you 10 reports, they are considered as 1  • Receiving check by overwatch requires 11 reports  • Reports in DM, Casual and other servers are combined for competitive • Steam profile reports  • Steam profile reports don't react to reports in CS:GO  • The person can receive a community ban for spam, deception, any abusive thing and etc.
• Some VAC updates & news Many people say that valve create "neural network" or artificial intelligence which will find Anti-Aims and to send you to overwatch.
Yes, it will be as CS:GO developers have confirmed it, but I don't know whether it works now or not.
But, check this video: Now it is more and more Anti-Aims are detected by VAC.
Some about which I know:  • Spin bot / Fast spin / Slow spin  • Fake jitter / Jitter 2 / Jitter / Backjitter  • Static AA / Dance / Headbang   & more.
W8 for more detection, can though rage will be gone :) 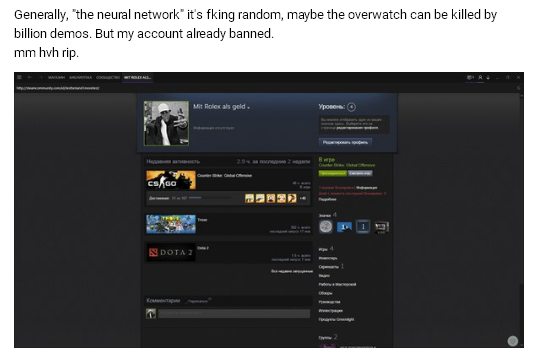 Conclusion:   Valve Anti-Cheat - awful system of protection against cheaters.
It is the worst development of Valve for all the time and most likely it is the most awful Anti-Cheat from all which you know.
Many cheaters quietly play on competitive, casual and other servers and unfortunately not to stop it.
Thanks for understanding! Yes, i take OVERWATCH ban in CS:GO, i'm raging 3 games per day without Anti-Aim and someone report bot me.
More I won't play with hacks.
But! It once again proves that if you play full legit, then you hardly to receive VAC BAN because this sʜɪᴛ.
http://My banned account Yea, it is ɴᴇᴡ ɢᴜɪᴅᴇ ᴏᴡɴᴇʀ - ᴊᴏɪɴ ᴏᴜʀ ɢʀᴏᴜᴘ http://The group will become closed soon