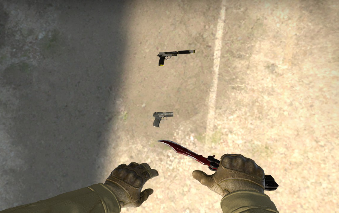 The USP-S and the P2000 are the two available starting pistols for the Counter-Terrorists.
They will always be equipped when you respawn if had died previously, and they go against the Glock-18, the Terrorist starting pistol.
They are both very similar in terms of stats and performances, and unlike the M4A4 and the M4A1-S, don't have too many distinct or game-changing differences.
So, let's take a closer look at what's the same and what's different between these two pistols. 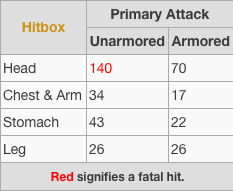 As these weapons are semi-automatic, we will not be covering recoil.
Both of these pistols are extremely accurate out to a long range.
The accuracy of these two pistols are higher than any other pistol apart from the Desert Eagle and the R8 Revolver.
Firing 24 shots from each pistol, one shot every second from Barrels to Above Pit on Dust2, stationary in a standing position, we can see that the USP-S has a slightly smaller grouping of bullets, albeit a more horizontal spread than the P2000.
Overall however, the USP-S is slightly more accurate than the P2000.
The unsuppressed USP-S, just like with the unsilenced M4A1-S, is less accurate than both its silenced form and the P2000. 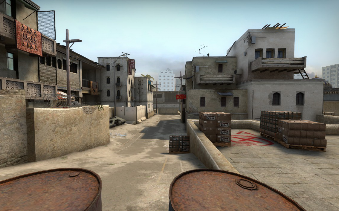 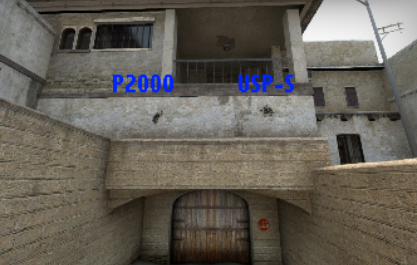 Both pistols move at 240 movement speed, which is the same as all pistols besides the Desert Eagle (230 units per second) and the R8 Revolver (220 u/per second).
These numbers are below the Knife (250 units per second), but faster than almost any other weapon class in the game, making these pistols great options if you want the movement speed similar to a knife but still have some firepower.

Overview of wall penetration.
Originally posted by the Counter-Strike wiki:Each weapon has a different penetration power value which ranges from 0 to 300.
A value of 0 means that that weapon will never penetrate any objects, while a value of 300 means it will penetrate harder surfaces for greater distances.
The total number of surfaces any bullet can penetrate in a single flight is capped at 4.
The USP-S and the P2000 both have a wall penetration stat of 100, which is the same as all pistols (except the Desert Eagle), submachine guns, and shotguns (excluding the Nova).
In practice, this means that the wall penetration power of the USP-S and the P2000 is very limited.
Both pistols are incapable of penetrating thicker objects like concrete or dirt (dirt actually provides the most resistance of all objects when wallbanging), as well as not being able to plow through multiple thin surfaces (like wood or plaster) as well as barely doing any damage when passing through said surfaces.
This makes both weapons poor choices for shooting through walls, as both weapons will barely do any damage IF they penetrate.
Combined with the slow semi-automatic fire and small magazine sizes, wallbanging is ill-advised unless absolutely necessary.


Other differences to note.

Magazine capacity and ammo reserve The P2000 holds 13 rounds of ammunition in a magazine, with 4 magazines in reserve, for a total ammo supply of 75 rounds, which is fair, but lower than weapons like the Dual Berettas, the Five-SeveN, the Tec-9, and the Glock-18.
The USP-S holds 12 rounds of ammunition in a magazine with 2 magazines in reserve, for a total ammo supply of 36 rounds.
While 12 rounds a mag and 24 total bullets in reserve might sound generous considering the headshotty nature of pistol rounds and eco rounds, the low ammunition supply of the USP-S may come back to bite you if you miss many shots, as well as semi-auto weapons generally being harder to aim with compared to full-auto weapons.
A low rate of fire may help conserve the lack of ammo available with a USP-S, so just like with the M4A1-S, it's important to pick your shots at the right time with high precision and accuracy.
Sound Just like with the M4A1-S, the USP-S is dead silent compared to every other weapon in the game, with the P2000 being significantly louder due to its unsilenced form.
in CS:GO, you only show up on the enemy radar if you have been seen as an enemy, meaning that if you manage to get behind a group of enemies on a pistol round and take a clean shot at any of them without them spotting you, you may go unnoticed.
Weapon length The P2000 unsurprisingly is the shorter weapon, due to its lack of a silencer which gives it a shorter barrel, and overall is the 9th shortest weapon in the game.
Interestingly however, the FAMAS conceals the player more than with a P2000.
Just like with the M4A1-S, with the suppressor attached, the USP-S is the longest pistol in the game, and overall its length is on the longer end of the spectrum, being longer than weapons like the Nova and the M249, but barely shorter than high-powered rifles like the AK-47, SG 553, and SCAR-20.
The unsilenced USP is the 15th longest weapon, which is slightly longer than the Zeus x27 and shorter than the UMP-45 SMG.
With the USP-S, it's important to take note of which corners that you may be held up in, and adjust.
Turning your back can conceal you much better, but it leaves you helpless if an enemy manages to spot you.
Removing the silencer makes the USP much shorter, but leaves you with its statistical disadvantages once removed and while also leaving you helpless while removing the silencer. 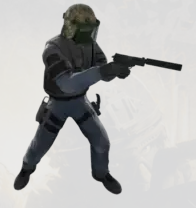 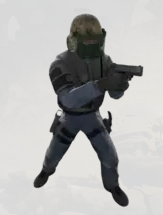 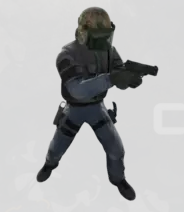 Which should I choose?

Unlike the M4A4 or the M4A1-S, player roles play limited roles in choosing the better weapon.
Pistol and eco rounds depend more on raw skill than gun rounds, due to the limited utility and firepower available for both teams on pistol rounds.
The P2000 is an all-around great pistol.
It scores higher accuracy and unarmored one-shot headshot ranges compared to a lot of its more expensive counterparts and the Glock-18, but is also hampered by its inferior armor penetration stats compared to more expensive pistols (except the Dual Berettas) and its low armor-penetration and firecap.
Compared to the USP-S, it sports more ammo and comparable accuracy but sacrifices a silencer, which doesn't allow for the stealthiest of kills all the time.
The P2000 is also more than serviceable at close-range combat and a skilled marksman can use it to score headshots on long-range foes on eco rounds.
The USP-S is another fantastic pistol for taking on the crucial and infamous pistol round.
It boasts superior accuracy compared to the Glock-18, capable of downing rushing Ts at long ranges without a struggle if properly aimed at the head.
It boasts a suppressor, which allows for near-silent shots, meaning that enemies relying on sound while have a hard time finding an accurate USP-S user.
While a low mag capacity, a slow rate of fire, a low armor penetration, and an overall low supply of ammunition might hinder the USP-S from being effective against multiple targets in close-quarters combat in pistol and anti-eco rounds, it can be negated with great trigger discipline and accuracy.
Practice makes perfect, and overall the USP-S statistically is a superior weapon compared to the P2000 overshadowed by its lack of ammo, making it a truly rewarding and devastating weapon for pistol for those who are unfazed with their accuracy. 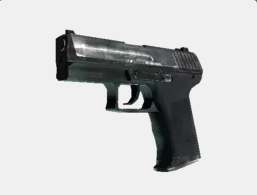 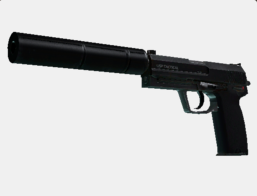 As mentioned earlier, the USP-S and P2000 are very similar pistols.
Both pistols are formidable choices on pistol rounds, however their effectiveness dwindles on eco rounds unless the user is a sharpshooter who is great for landing those headshots (definitely not me!).
However, at the end of the day, the USP-S is the weapon that I prefer due to its higher accuracy.
It has a higher skill ceiling, but its effectiveness in the hands of a skilled player on a pistol/anti-eco cannot be denied.
The P2000 is definitely a safer choice, and is all-around a great pistol, but this is just my opinon.
Try both of them out and choose which one is the better bet for you.
Thanks for reading this guide! I hope you have enjoyed it and if you have, be sure to rate it up and favorite! My other guide:http://steamcommunity.
com/sharedfiles/filedetails/?id=848611143