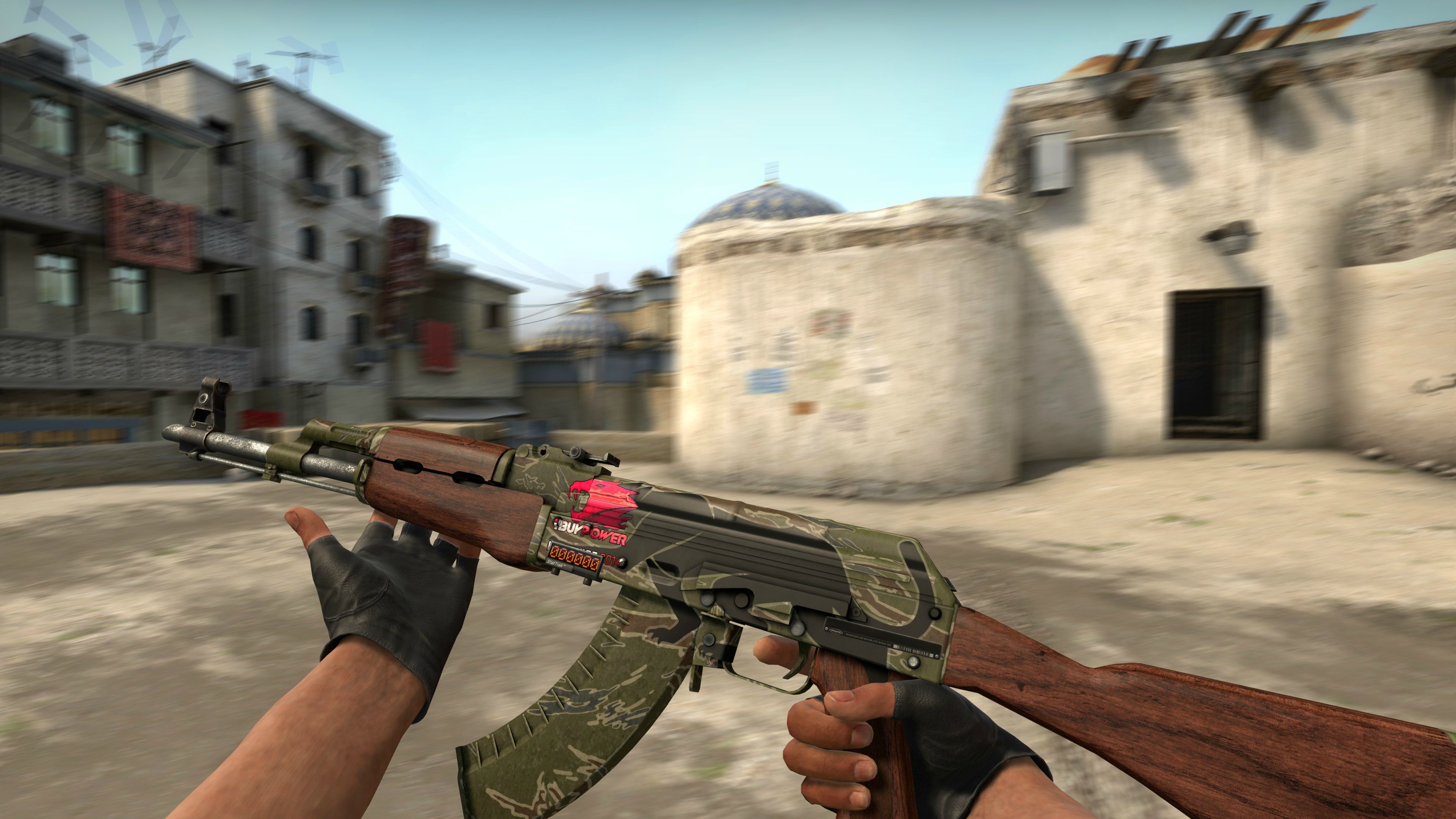 A large portion of this guide is made based on personal experience.
This guide will NOT help you 100% accurately determine the prices of your guns.
Some goes down to personal experience.
Browse stickered guns (mainly Katowice 2014 guns) more often to get better ideas of the factors and multipliers affecting the prices of the guns.
(such as on /r/globaloffensivetrade) Edit from September 2017 - this guide isn't outdated yet, except for the fact that the sticker prices rose since the 1.
5 years of making this guide PLEASE DO NOT ADD ME FOR PRICECHECKS

(NOTE - prices taken from 8th of Feb, 2016) There are many factors when it comes to pricechecking a stickered gun.
Here are all the factors and multipliers - 1.
Positioning 2.
Amount of stickers 3.
Suitability 4.
Price of the actual gun itself 5.
Condition of the gun 6.
Condition of the sticker 7.
Holoed or not stickers 8.
New guns with katowice 2014 stickers The sticker price percentage can vary anywhere from 2% to 75% (yes, that is a ♥♥♥♥ing lot)

Firstly the positioning - more visibility and/or fills up bland space = more value For example, an AWP Graphite has no paint on the scope.
An iBUYPOWER Katowice 2014 Holo will have most of its value retained as it fills up the non-painted space and is also very visible from the players point of view Best positioning for guns in order FOR MOST CONDITIONS - AWP - Scope, body, bolt, stock (stock is worth waay less than on the bolt too, because it is only visible when inspecting no matter what viewmodel one uses) AK-47 - Wood, back of the gun, positioning next to the wood,above the mag M4A4 - Above the mag, the spot closer to the stock, the spot not mentioned but not on the stock, the stock M4A1-S - Above the mag, handle, next spot which is not on the handle, the spot all the way on the back Handguns (excluding R8 Revolver) - Right above the handle, tip, middle of the slide, handle Why do I say "for most conditions"? Well, it can vary on the suitability of the gun, which I will talk in another section.
For example, a "Pink Panther" (AK-47 Jaguar with an iBUYPOWER sticker on the head of the jaguar) can take up to 40% sticker price due to its suitability.

When 1 iBUYPOWER Katowice 2014 Holo is slapped on the wood of an AK-47 Redline FT, it is 80k But when 4 BUYPOWER Katowice 2014 Holos are pasted on the redline, it goes for 1100k+ (more than 30% sticker price for an already ridiculously high priced sticker) Why? This is circular logic.
The fact that there are a number of stickers does not explain why having more stickers changes the "10% rule" (which, even if you say it is not, is in fact a rule of practice; it's a standard - an important one - that prevents sticker PCs from being arbitrary).
You have to actually explain why it is that as you have more of the same "valuable" sticker, the value per-sticker increases.
The answer: opportunity cost.
Say I buy an AK Redline with an iBP Holo on the grip.
You know what would go great with that iBP Holo? One.
.
.
two.
.
.
or three more! But you realize that to get those other three stickers, you have to pay full price per-sticker.
You can't just buy an iBP Redline with a sticker in another spot and fuse them together some how.
Because of that, the more of the "desirable" sticker(s) that you have on the gun, the more a buyer is/should be willing to pay per-sticker.
By buying your gun, they're forgoing the opportunity cost of having to then buy the same sticker(s) and add them later.
In other words, the more "complete" that a gun is in terms of the stickers you want on it, the more a buyer should be willing to pay since he doesn't have to make up what is lacking.
"Because you put four Crown Foils on this for me, I don't have to buy this other guy's Fire Serpent with two Crowns and also two individual stickers.
As a result, I'm willing to pay more than the standard going rate since it saves me the opportunity cost otherwise.
(Credits to /u/RizenLazarus for the explanation ) For example, a 4x katowice stickered gun (not same stickers but from the same tournament) takes about 7-20% sticker price (depending on the other factors too, like holoed, etc,) .
.
.
while a 4x Crown foiled AK-47 redline can take up to 50% sticker price, as well as a P250 Franklin with 4 Swag foils (other factors in play) In conclusion, the more and more similar stickers (if not, the exact same ones), the more value added 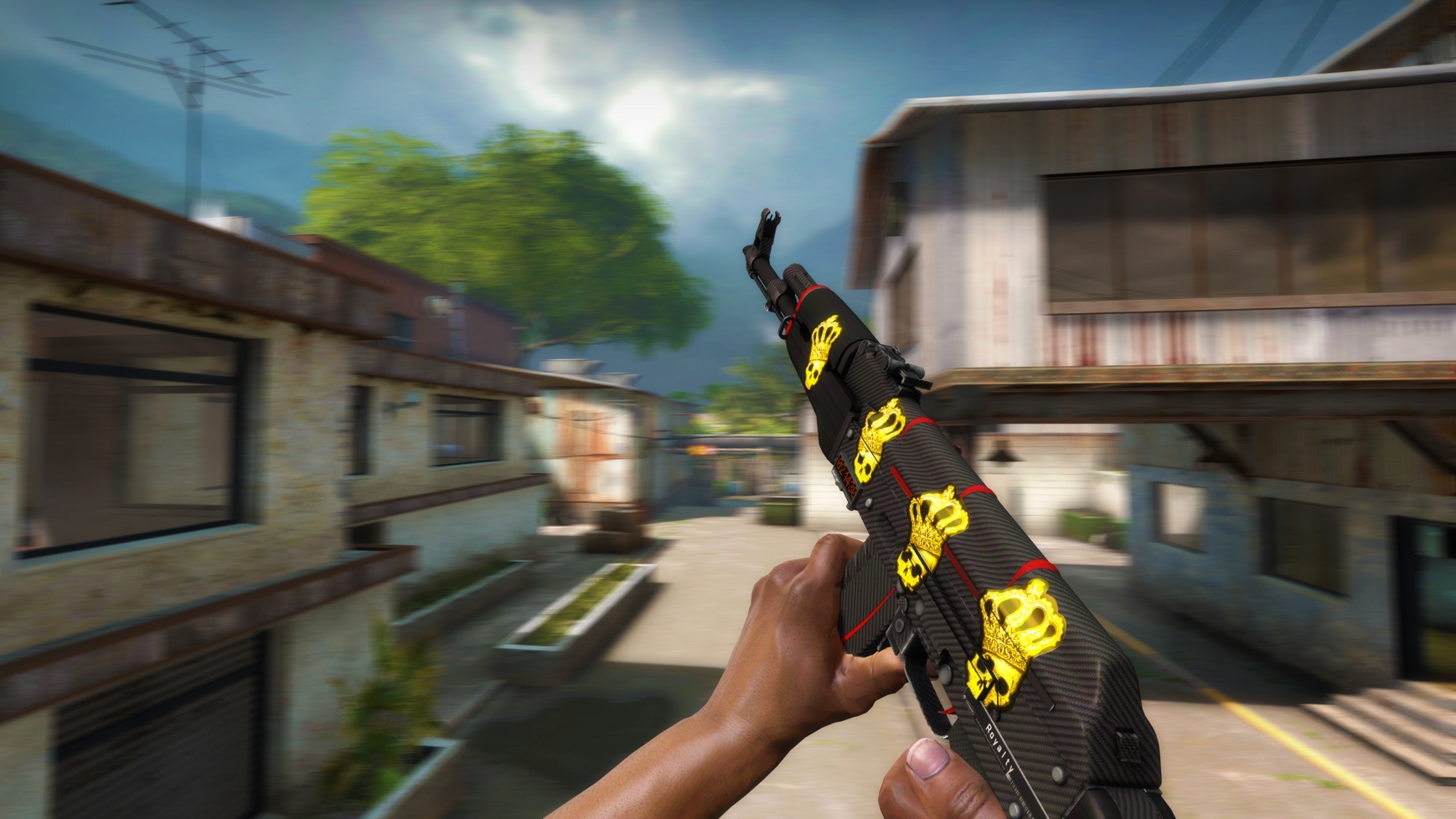 As I talked about the "Pink Panther" AK-47 Jaguar earlier, it took a lot of sticker value because of its suitability on the gun.
For example, iBUYPOWER Katowice 2014 (holos and non-holos) are very suitable on redline because it has a similar feature - color.
Thus, it keeps from 9% (for 1 sticker) to 50% (for 4 similar stickers) for the iBP katos.
If it doesn't really fit the theme of the gun, it will take about 6 - 8% sticker price.
More depending on the amount of similar stickers For other guns, it could be because it blends in well, like Swag foils on a P250 Franklin (note - some stickers still take huge percentages because they are versatile - they look good on all kinds of guns + the fact that there are 4 of the holoed stickers) 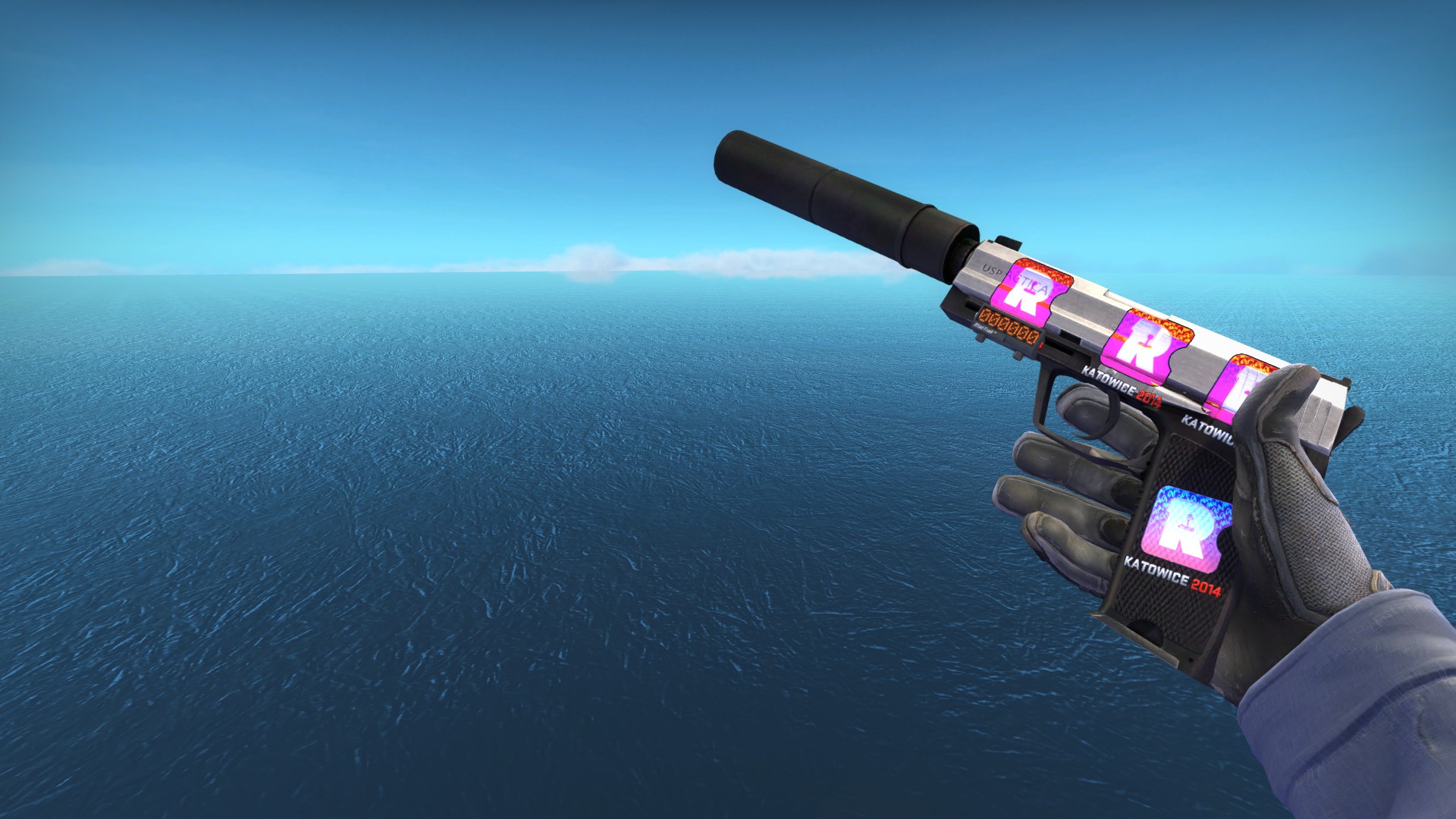 Price of the actual gun itself

Self-explanatory.
The more expensive the gun itself is, the more value it takes (unless it looks about the same as the cheaper ones, like FT and FN blue laminate AK-47s) If the gun is a♥♥♥♥♥♥skin (worth less than 6 cents, common drop item), it will generally take less than 5%~ of the sticker price

Condition of the gun

(Does not affect the laminate AKs cos' they look the same) Kinda similar to the price of the gun itself and the suitability factor.
For example, a BS AK-47 Redline with 4 iBP kato 2014 holos can go for 850k~ while a FT goes for 1150k~

Condition of the sticker

God forbid, if the owner/you (why u do dis) scrape the stickers but still leave them intact, they take much less of their original value.
For example, if I scratched the stickers on a 4x iBP kato 14 holoed AK redline, it would go down in value about 40% from their original worth.
The more scraped the stickers are, the less value it takes.
cri evri tim 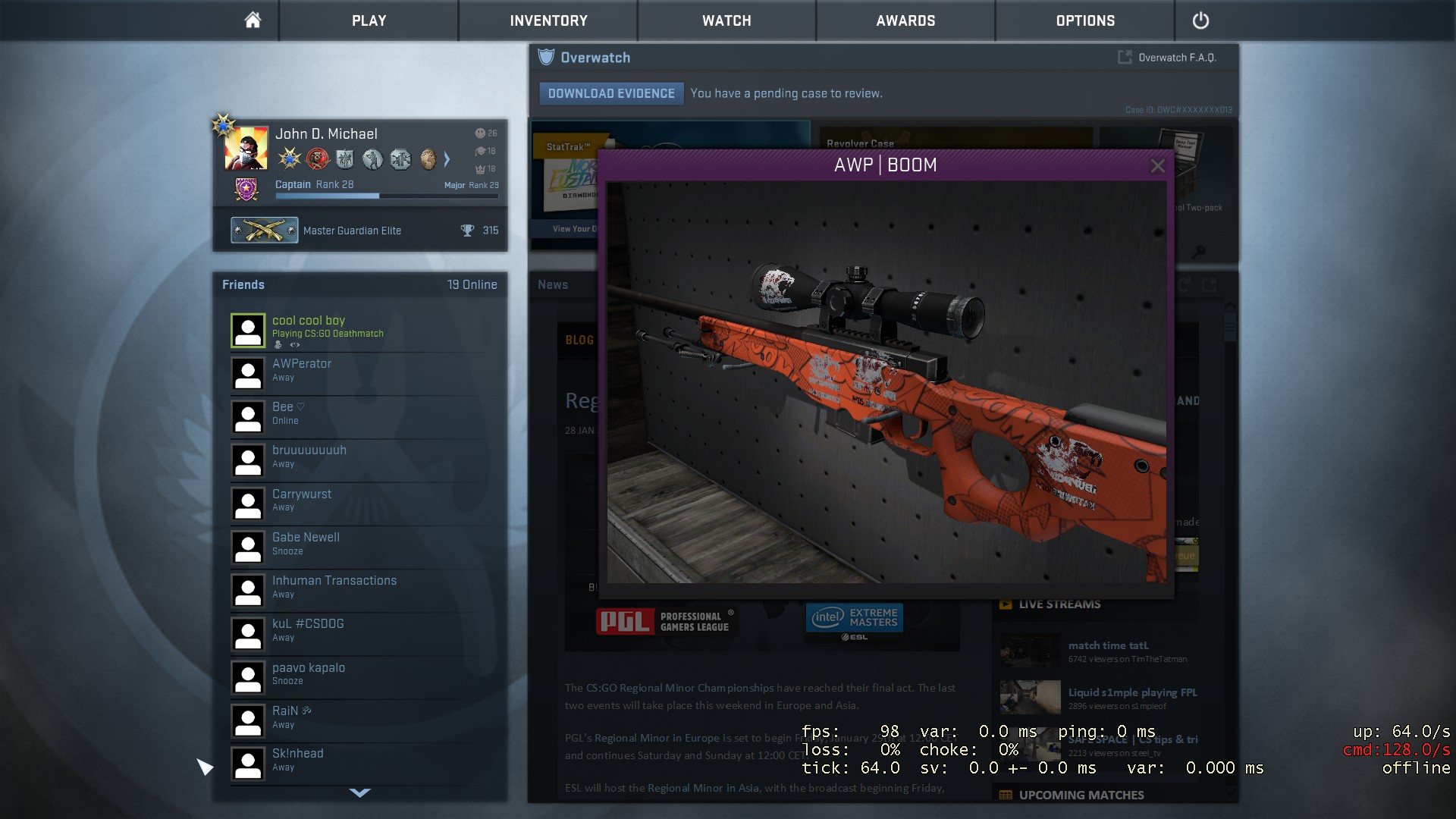 Holoed stickers tend to take a larger percentage (mainly becasue they look better than their non-holoed counterparts, even though in all cases they are more expensive) Normal 4x tend to take 15-25% sticker while holos can go from 30% to 75% if they are all the same stickers (Note - most 75% sticker priced guns could be bought for cheaper.
Just buy a 3x one at 20% ish sticker price and slap an extra sticker on) EDIT - Thanks to Huuge for his screenshot! (pls don't kill me .
_.
) 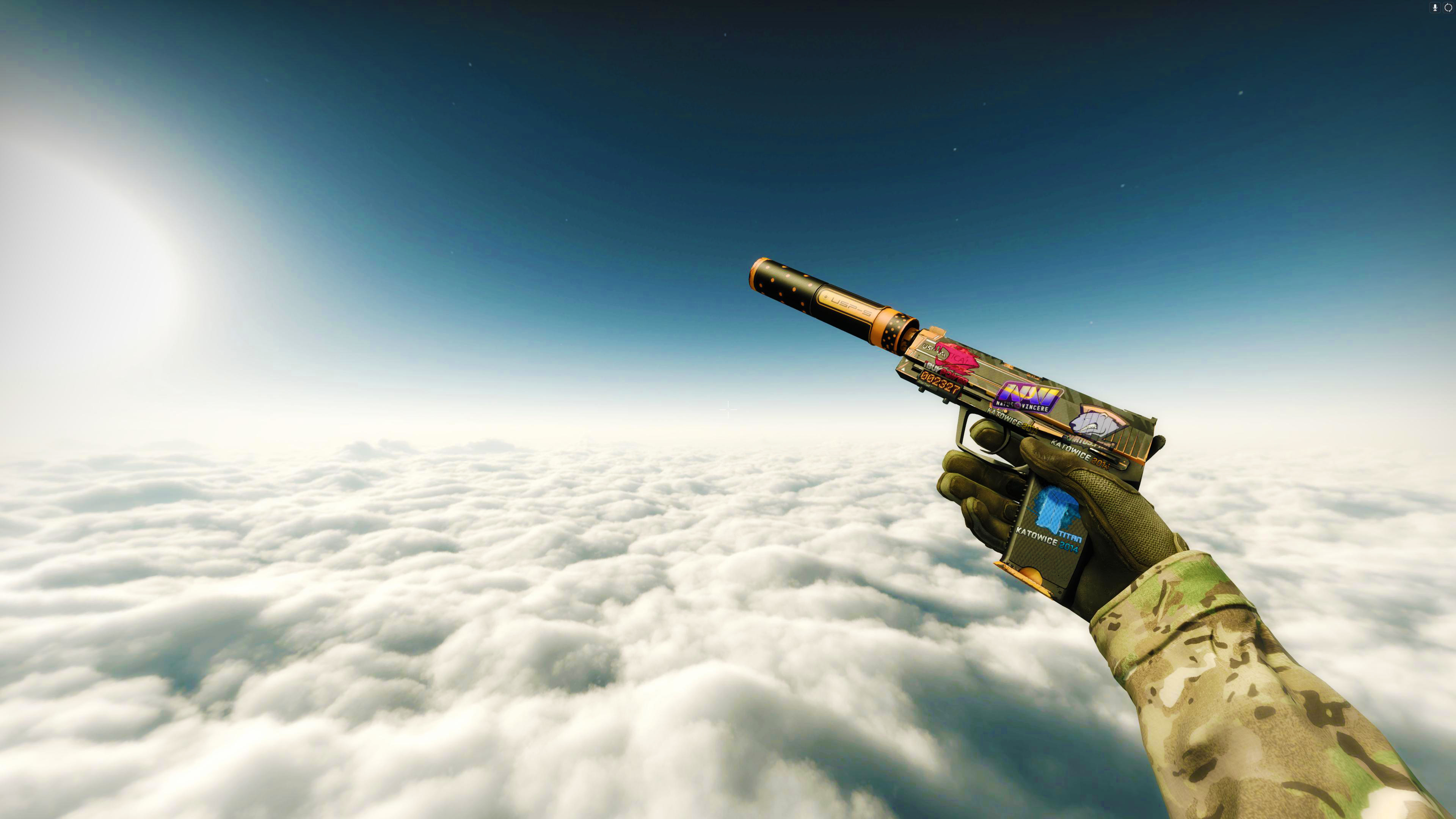 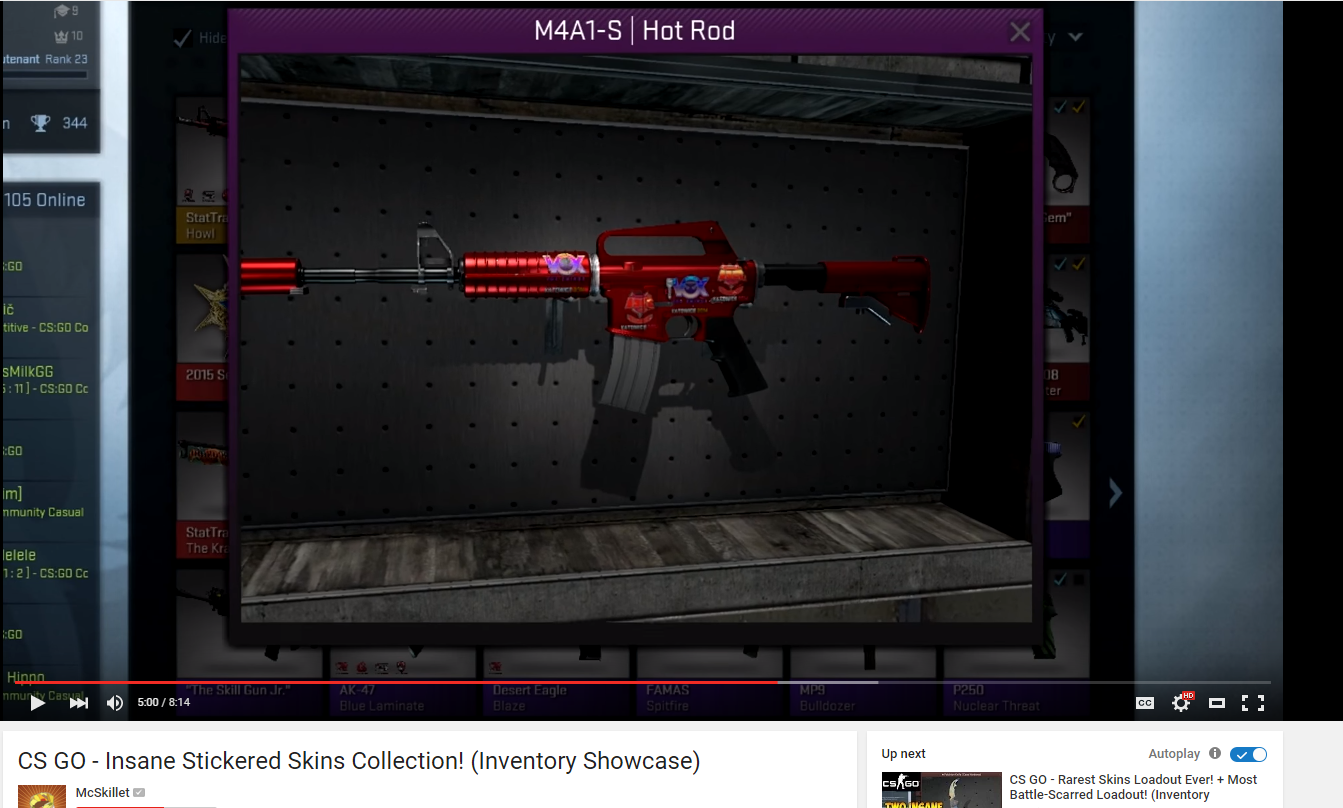 THERE IS NO SUCH THING AS "10% STICKER RULE" Check if the stickers are scraped or not before offering If you see a sitckered gun that you think is underpriced according to personal experience and from this guide, it is a chance for you to flip the item for a profit And lastly, don't get sharked! ~ Dysk1ddy