Although being a nuclear power plant, ironically the damage dealt by the bomb is low on Nuke in comparison to other maps: The bomb damage is 400 and the blast radius is 1400 units; other maps like Dust2, Inferno or Overpass have 500 damage and 1750 units radius.
Valve reduced the damage in Nuke after two Na'Vi players died while trying to save their weapons in a match against Astralis at IEM Katowice 2017.
Due to these stats there is a funny way to survey the lethal bomb radius: Using cl_weapon_debug_show_accuracy 1 on a private server (with sv_cheats 1) you can check out the deadly radius of specific bomb plants by shooting with a Five-Seven from where you would plant the bomb.
The appearing white circle indicates the area until which you lose more than 99hp (while having armor) from the bomb explosion.
(Source) For example, surprisingly, fake vent is basically always safe if you have 100hp and armor.
The same applies for the corner of observation which is a very convenient spot.
Both positions can be seen in the screen-shots above.
Also, often it's already enough to go in the corner behind single door on B; and it's not neccessary to run till secret to be okay when saving via B tunnels.
In the following you see all available spawn points for Ts and CTs in competitive, there are 8 possible spawn points for each team.
Knowing these, you can figure out how good your spawn actually is.
Although tempting, it is actually not possible to wallbang through the roller shutters between ramp and A site, and ramp and B site.
You can jump on the window board in lobby for an off angle.
Take the ladder to the ledge and crouch in front of the window, then spam jumping while still crouching, after a few tries you will sit on the window board and then can walk towards the middle.
It's useful as CT to defend a bomb dropped in lobby.
You can get down from top of hut without making a jump sound by crouching down the boxes and each time releasing crouch just before touching the next lower level.
The same applies for walking from outside heaven to main via the yellow barrels.
Graffitis on windows are only seen from the side from which they have been sprayed, so you can hide behide them while you have clear sight yourself.
This works in observation and locker room: 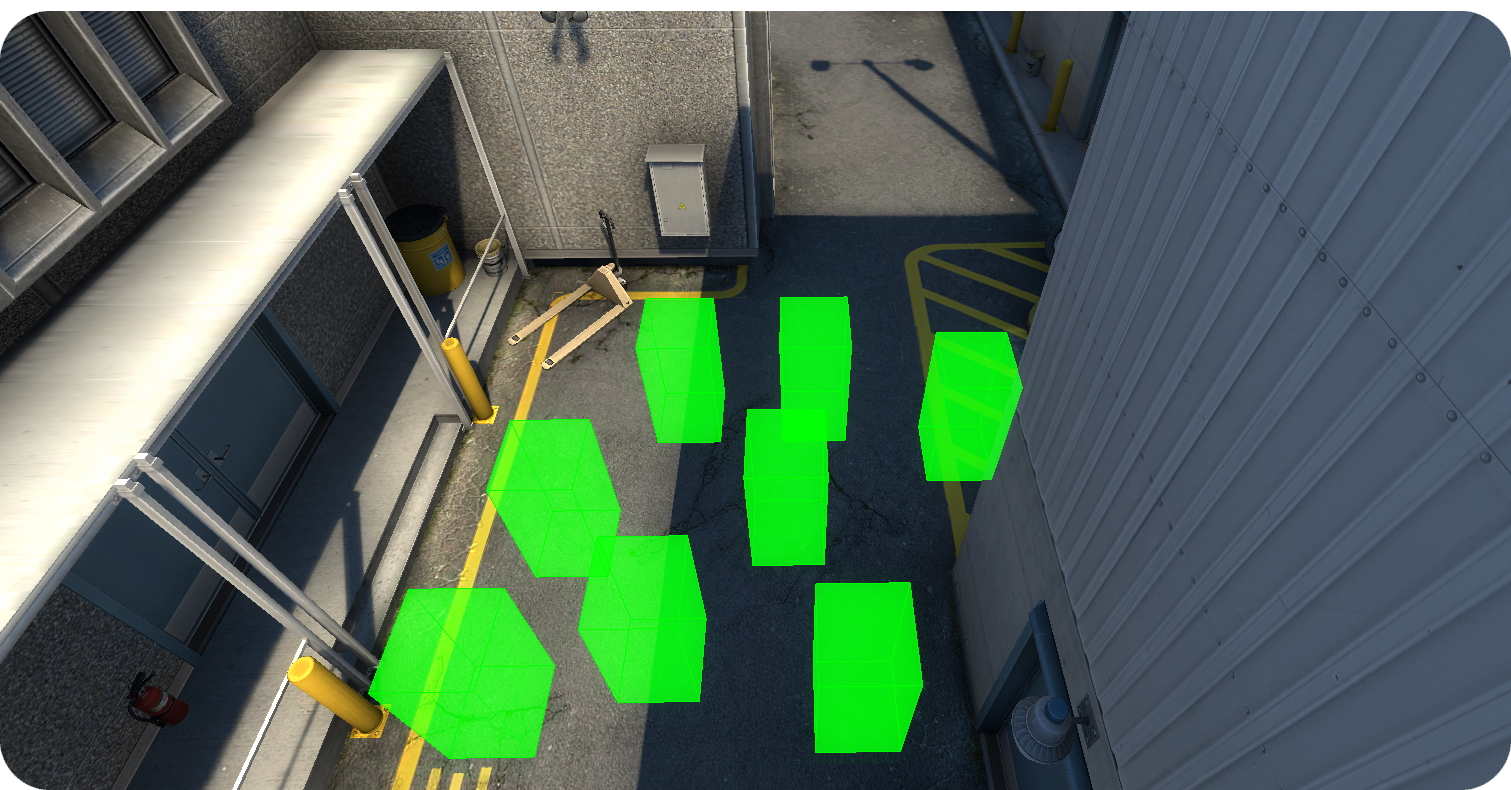 When you noclip through the bottom of the map you can get to the miniature map that is used as the surrounding of Nuke: Nuke has the reputation of having very one sided results.
But I analysed around 600 Nuke matchmaking matches and it turns out that close results are way more likely:

How to use this guide

If you want to look at and train the nades in this guide yourself, open the console and put in map de_nukeAfter the map loaded, go T and copy the following commands into the console: sv_cheats 1sv_infinite_ammo 1ammo_grenade_limit_total 5sv_grenade_trajectory 1mp_roundtime_defuse 60mp_t_default_grenades "weapon_flashbang weapon_hegrenade weapon_smokegrenade weapon_decoy weapon_molotov"bot_kickmp_warmup_endmp_restartgame 1That way you have an unlimited supply of all grenades and you can see the grenade trajectory.
For all nades I included the command to teleport you to the correct position including the correct angle.
For that you just have to paste the setpos command in the console and you will be in the exact place (including the correct crosshair placement) for the nade.
If not otherwise specified, all nades are to be thrown while standing with left click.
In case of jump throws you will need a jump throw bind in order to be able to throw them consistently.
For this, put alias “+jumpthrow” “+jump;-attack”; alias “-jumpthrow” “-jump”; bind “v” “+jumpthrow” into the console.
Then you jump throw a nade by selecting it, then holding the left mouse button and then pressing v.
If putting it in the console does not work for you, you have to write it in the autoexec.
cfg located in \Steam\userdata\<YOURID>\730\local\cfg (create one if there is none).
All nades in this guide have easy lineups, so take a moment to look at the crosshair placement, there will almost always be an abvious marker where to place it.
Also, no grenade in this guide requires annoying fix points on the ground, but the throw locations are either obvious (a specific corner) or can be reached by placing yourself correctly in relation to a specific wall (marked in the screen-shots). 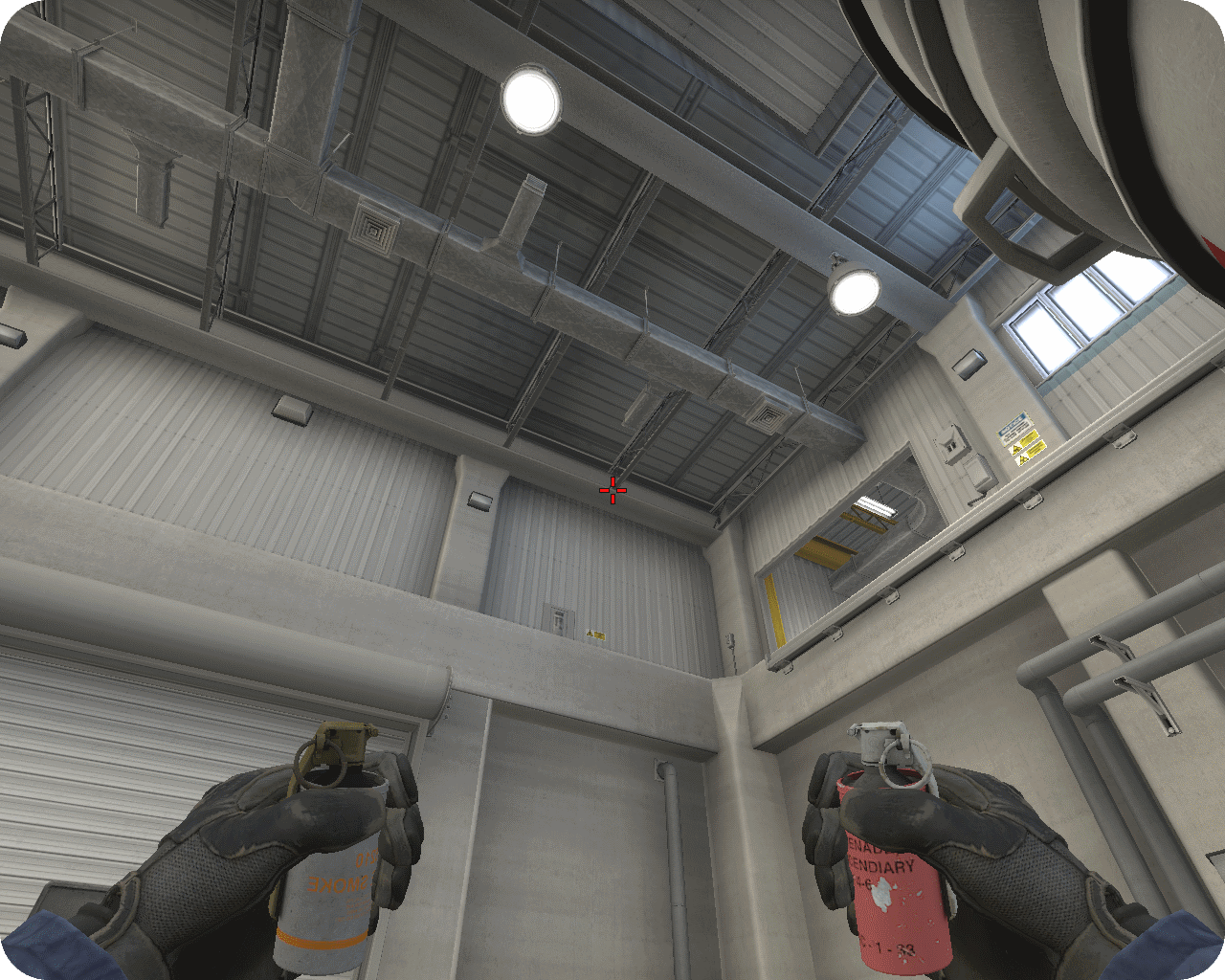 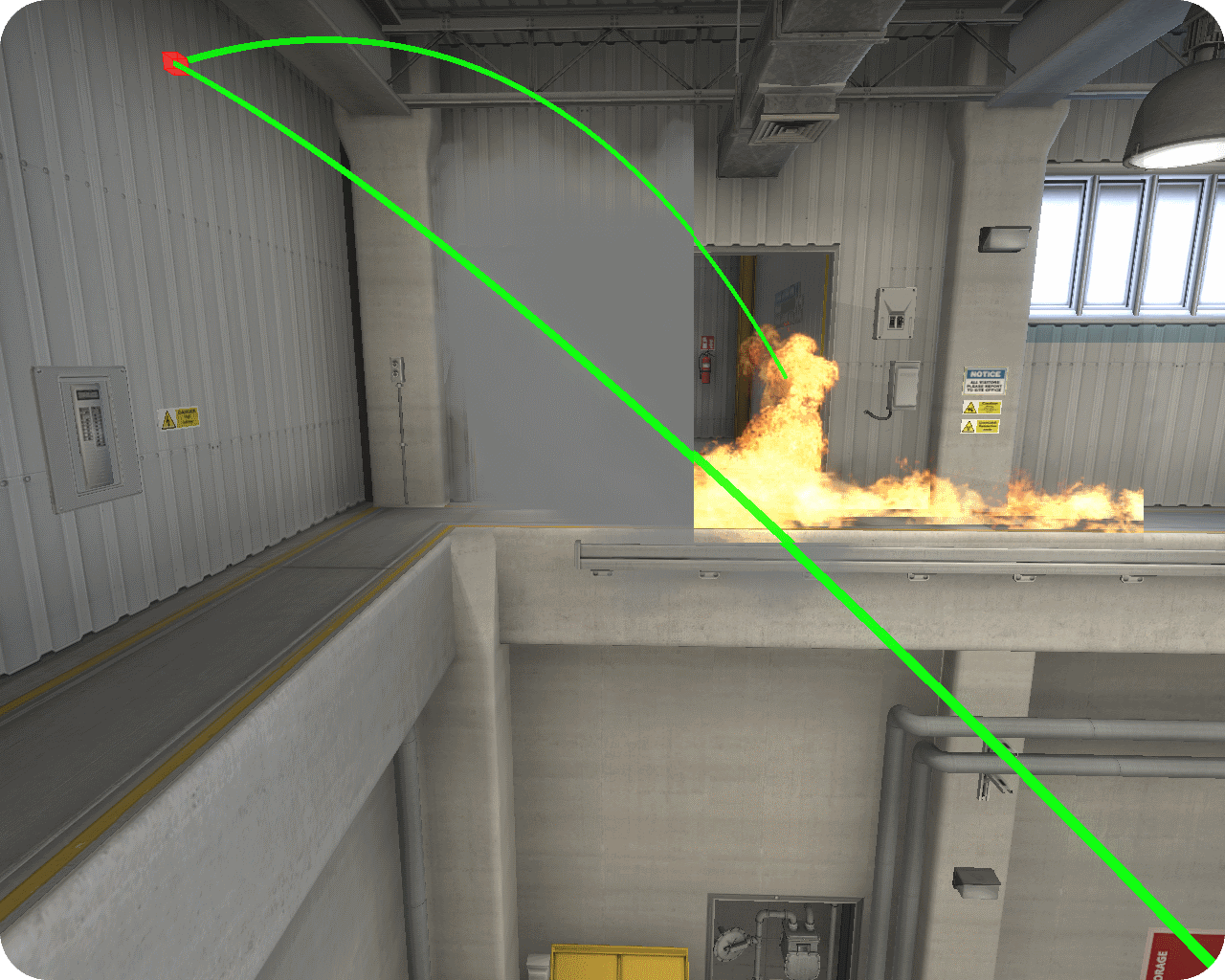 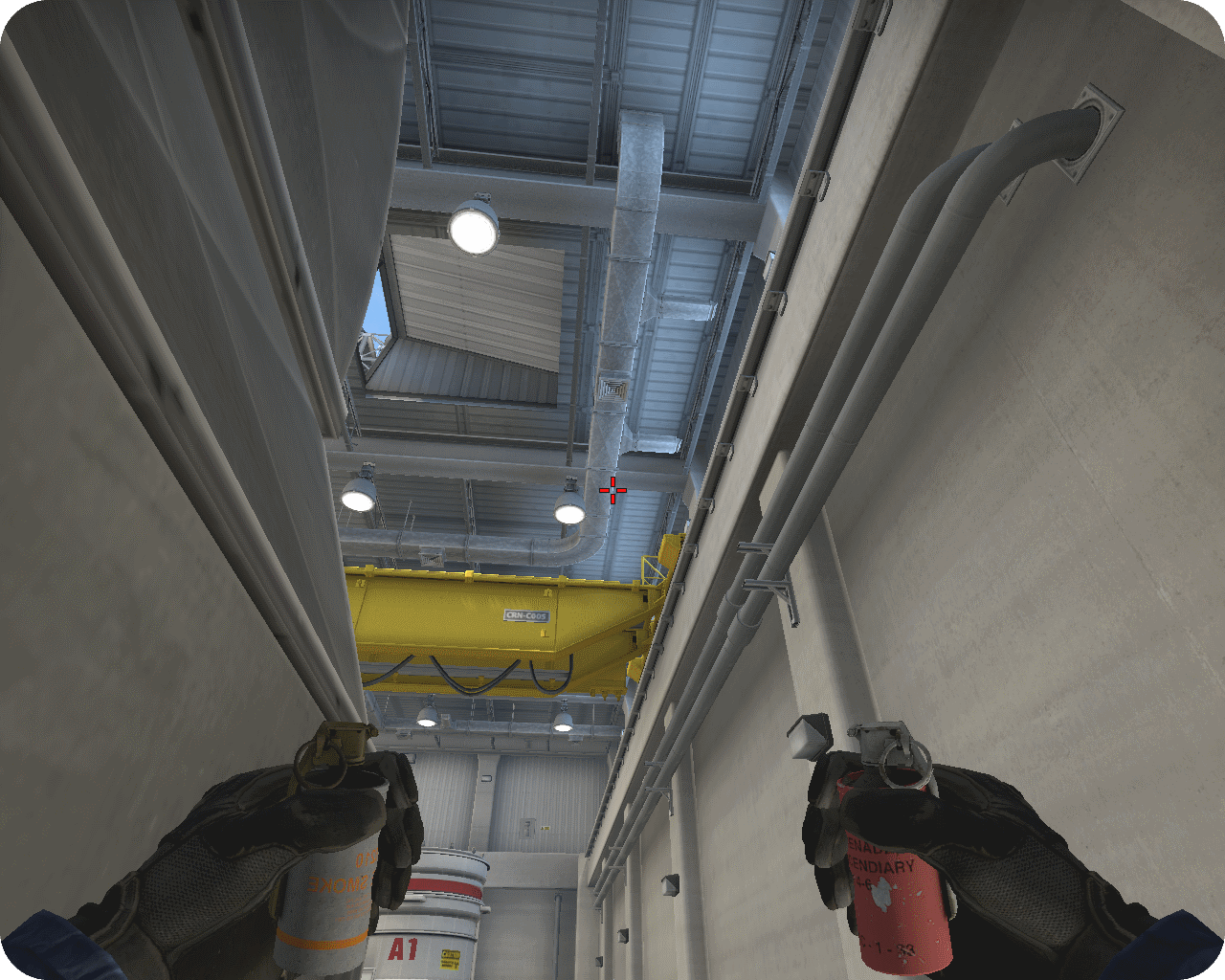 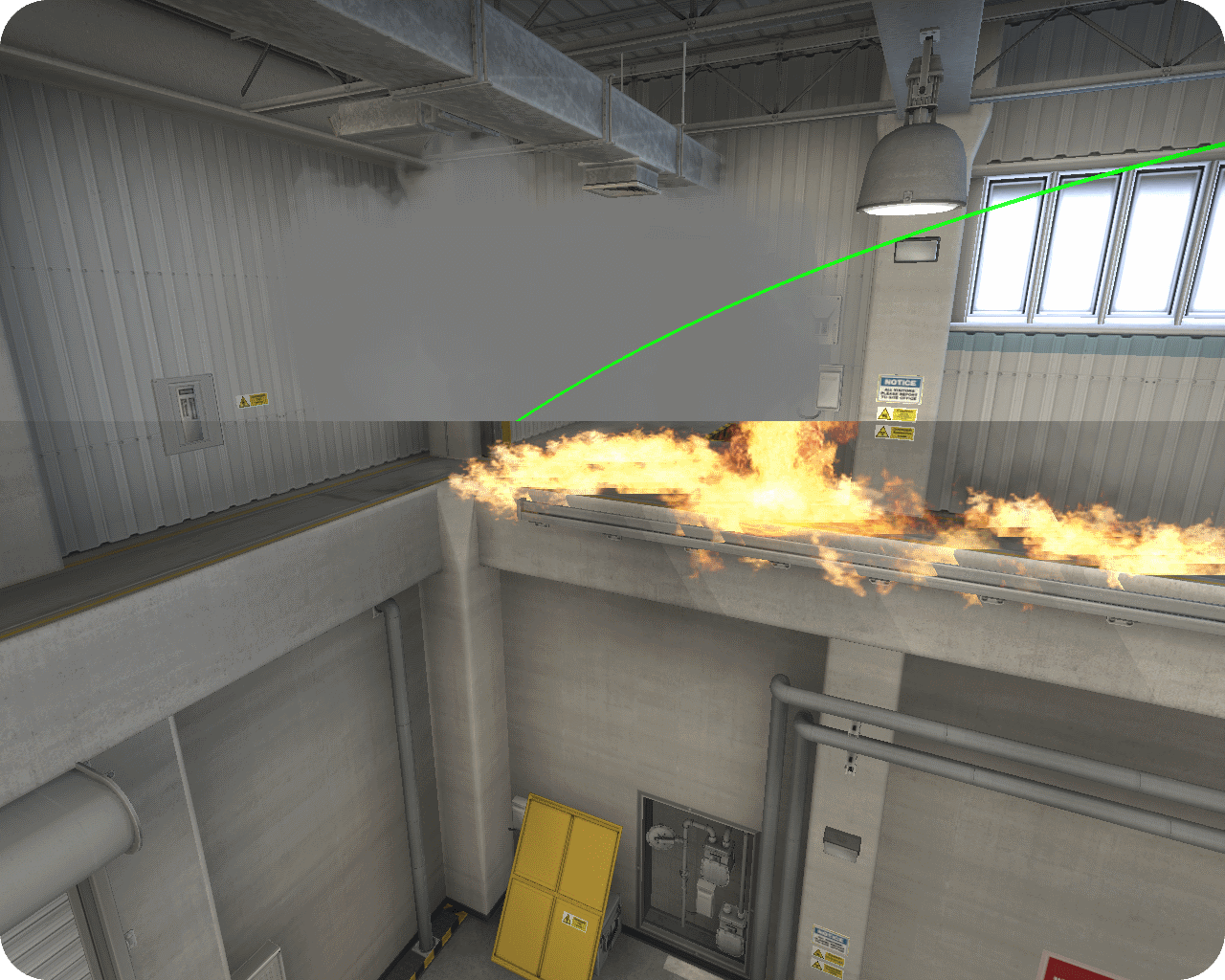 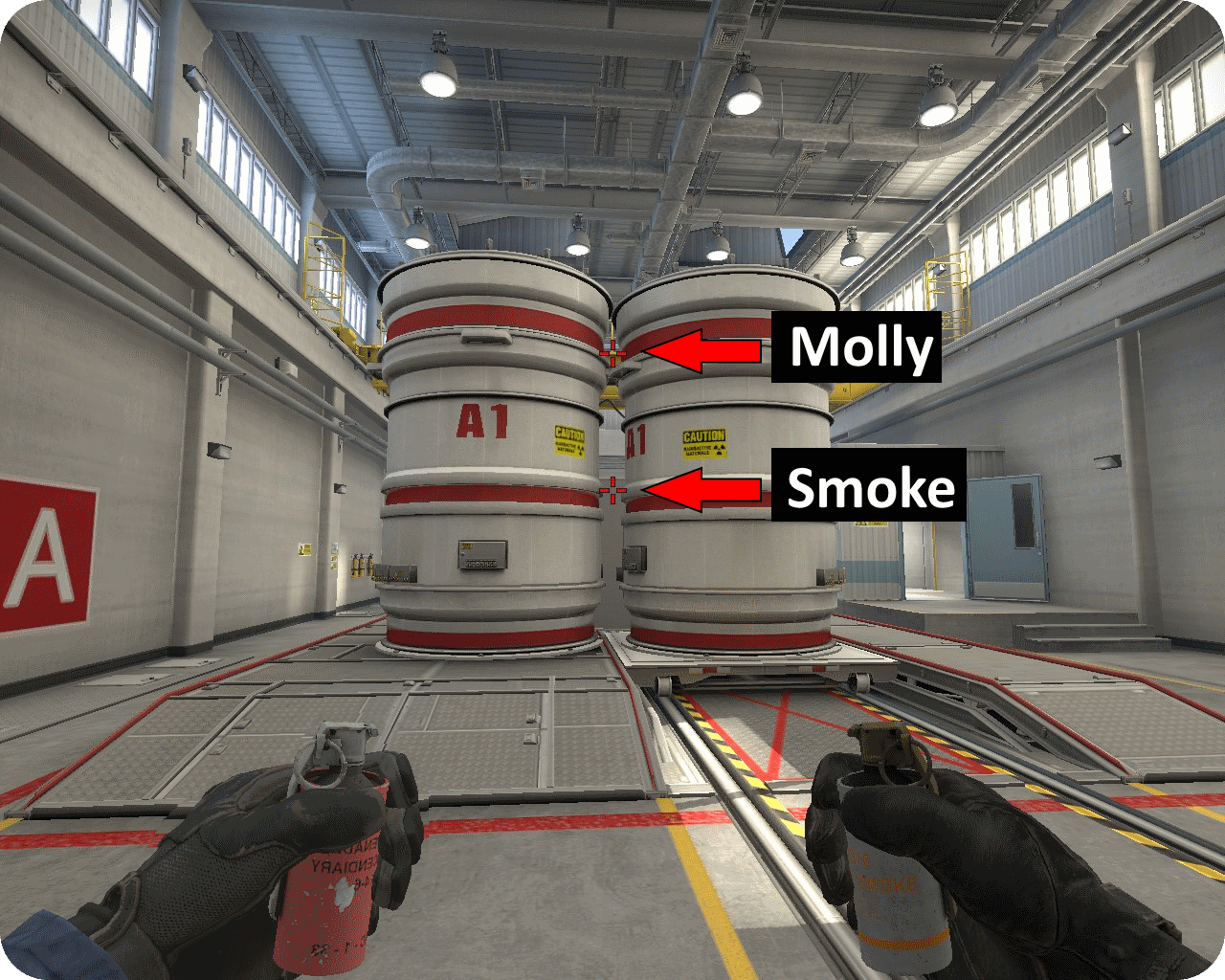 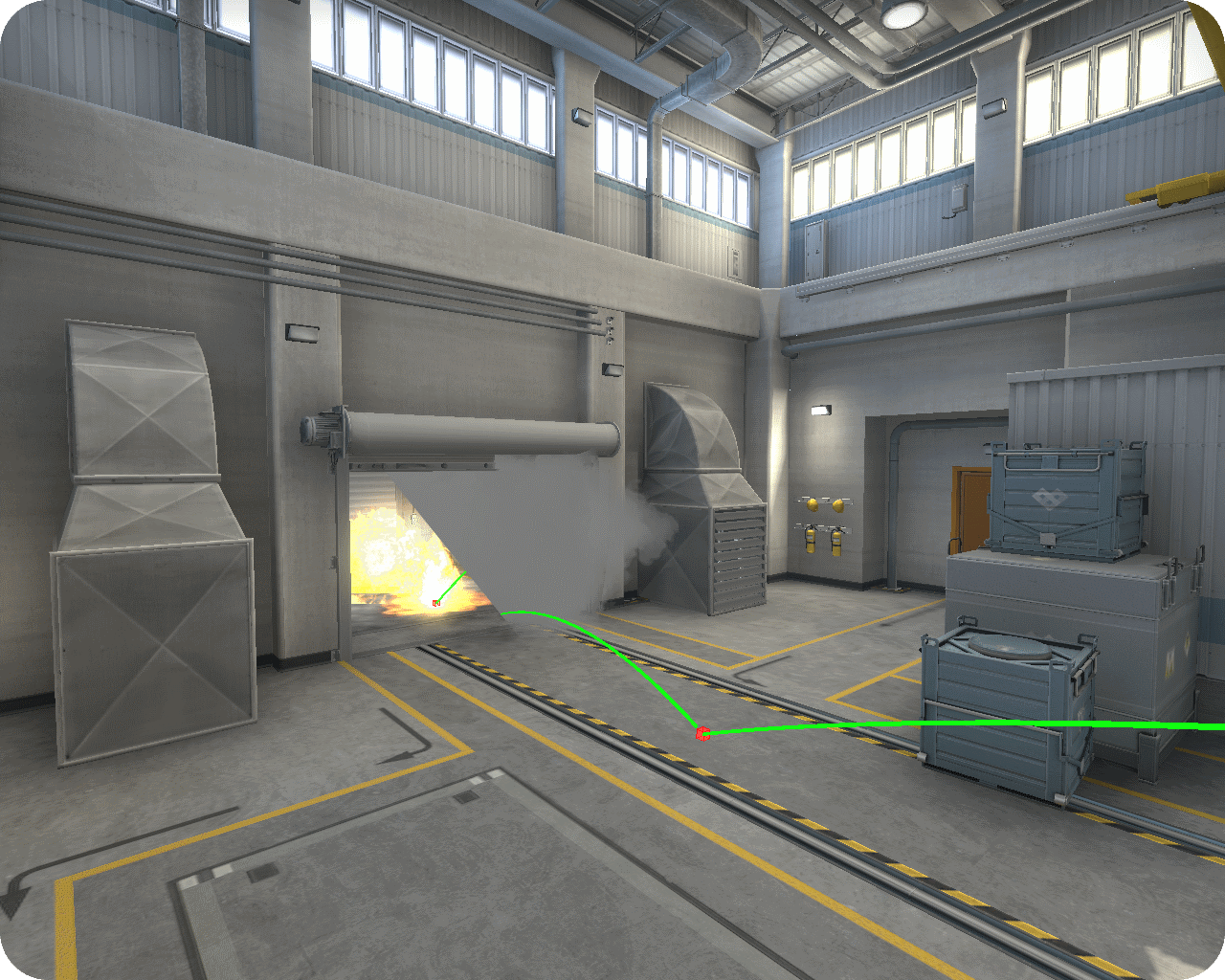 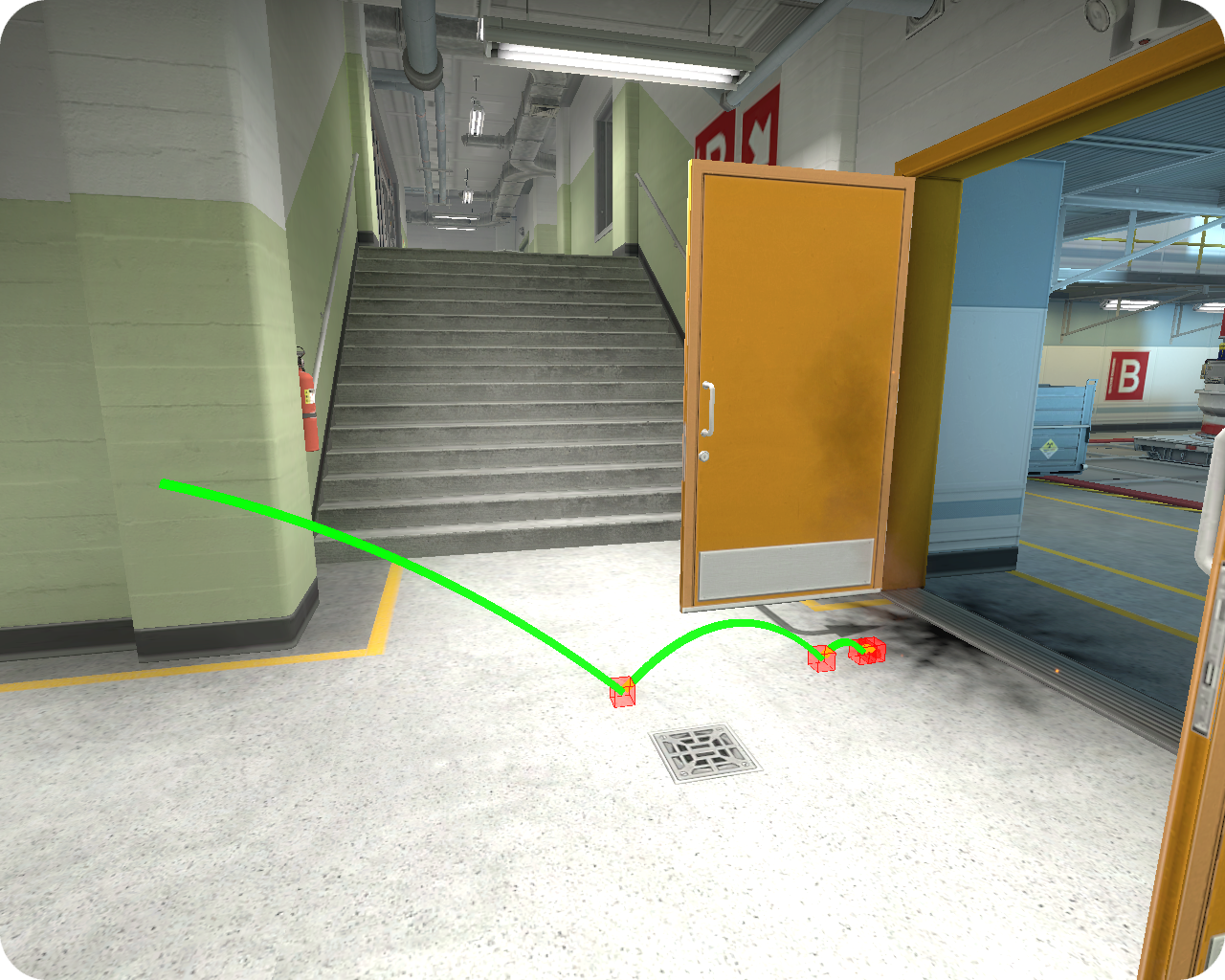 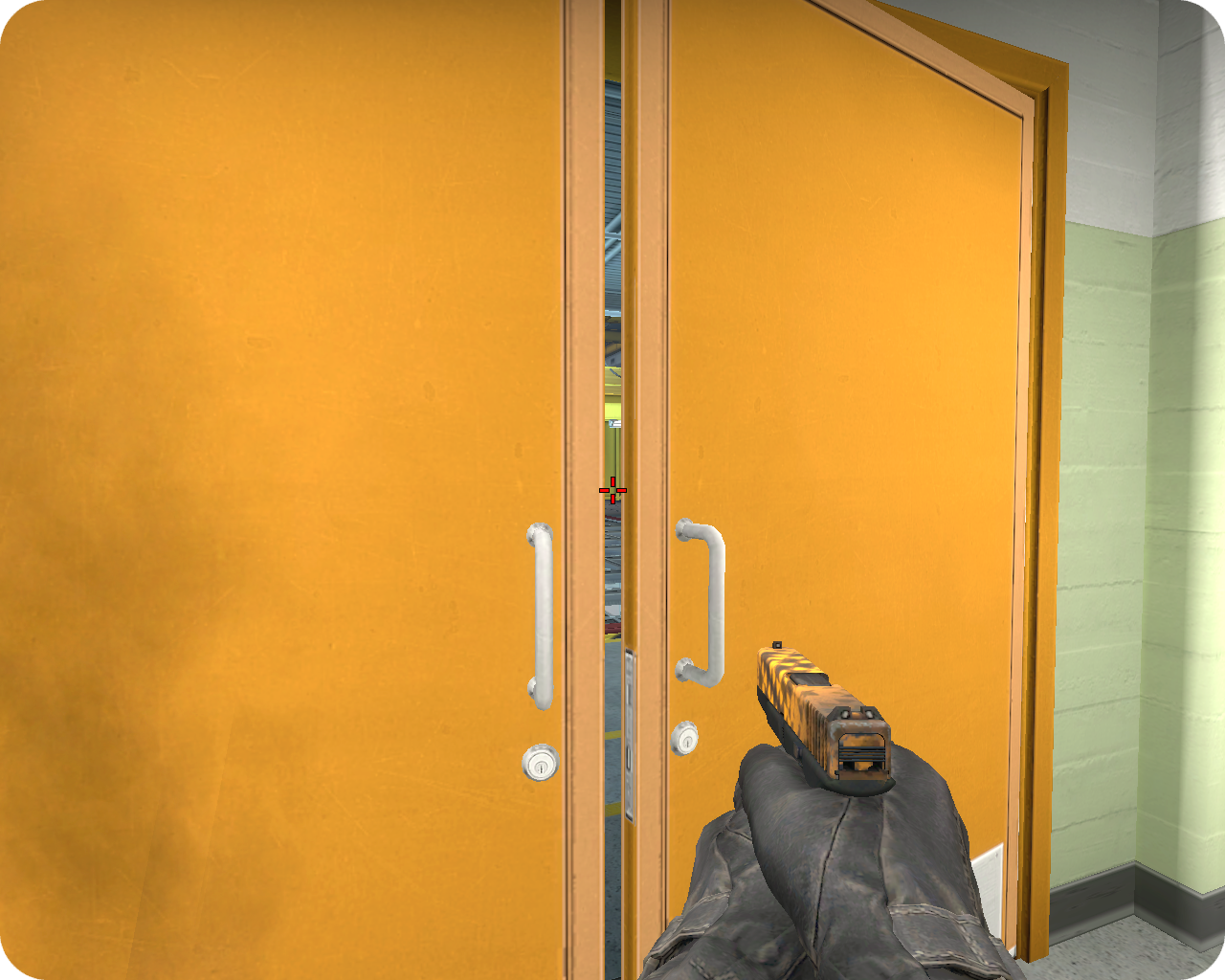 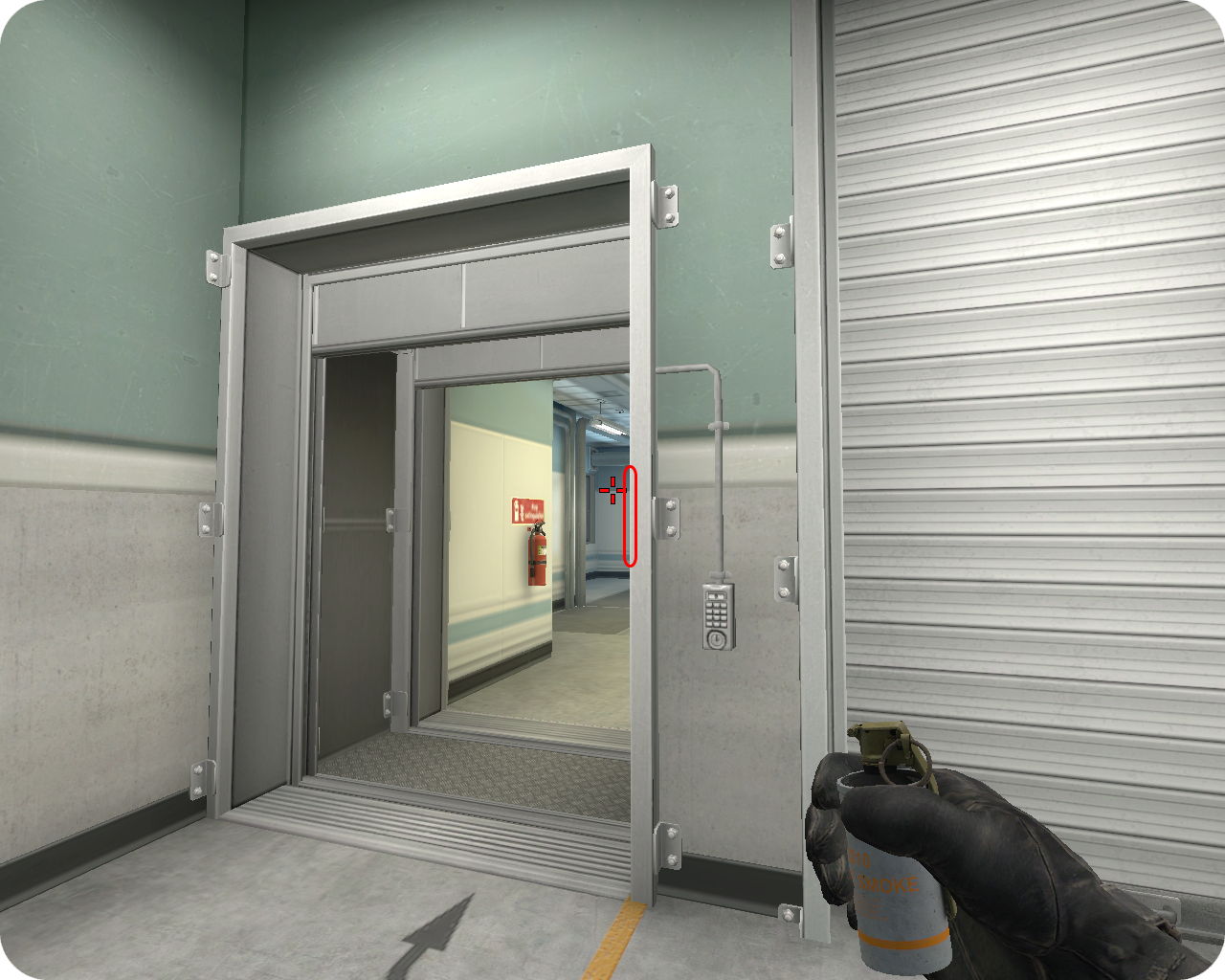 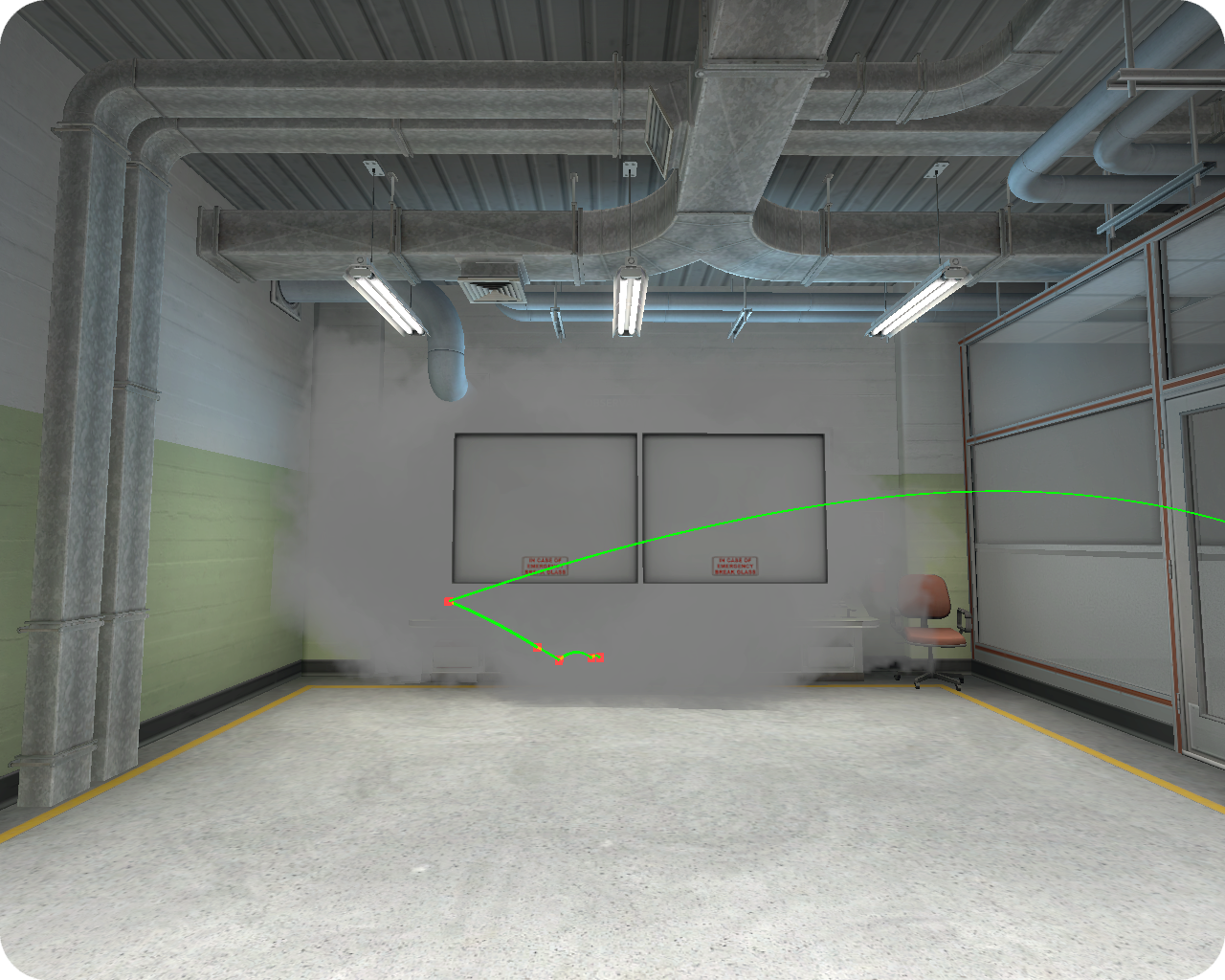 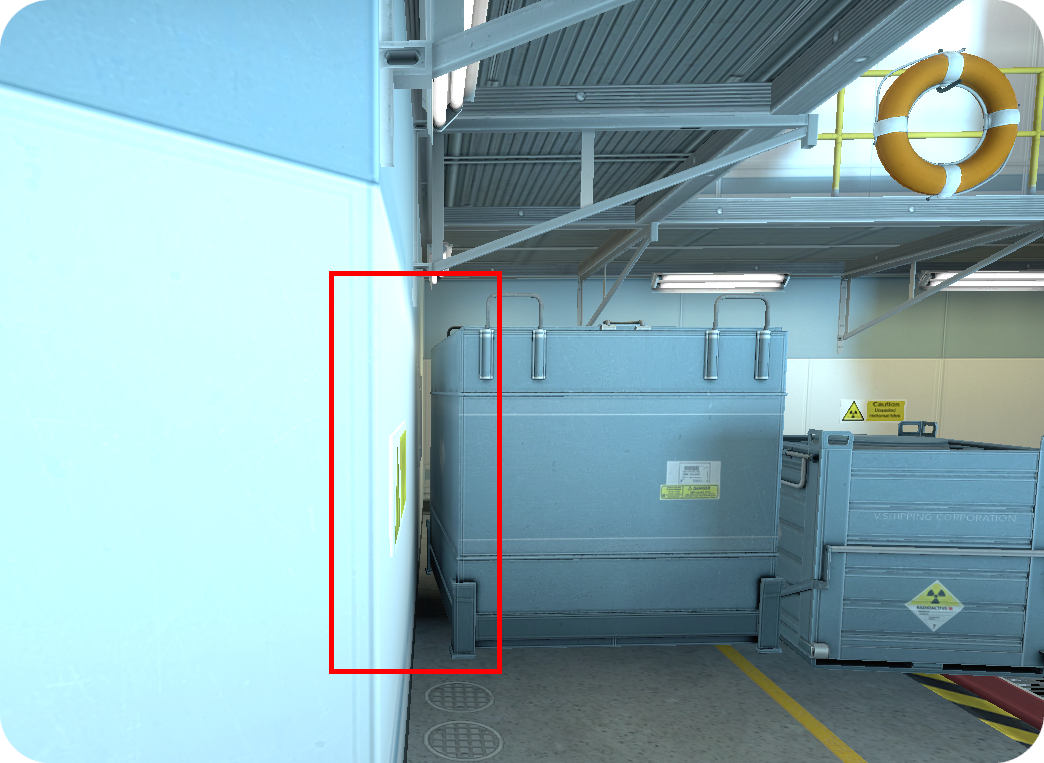 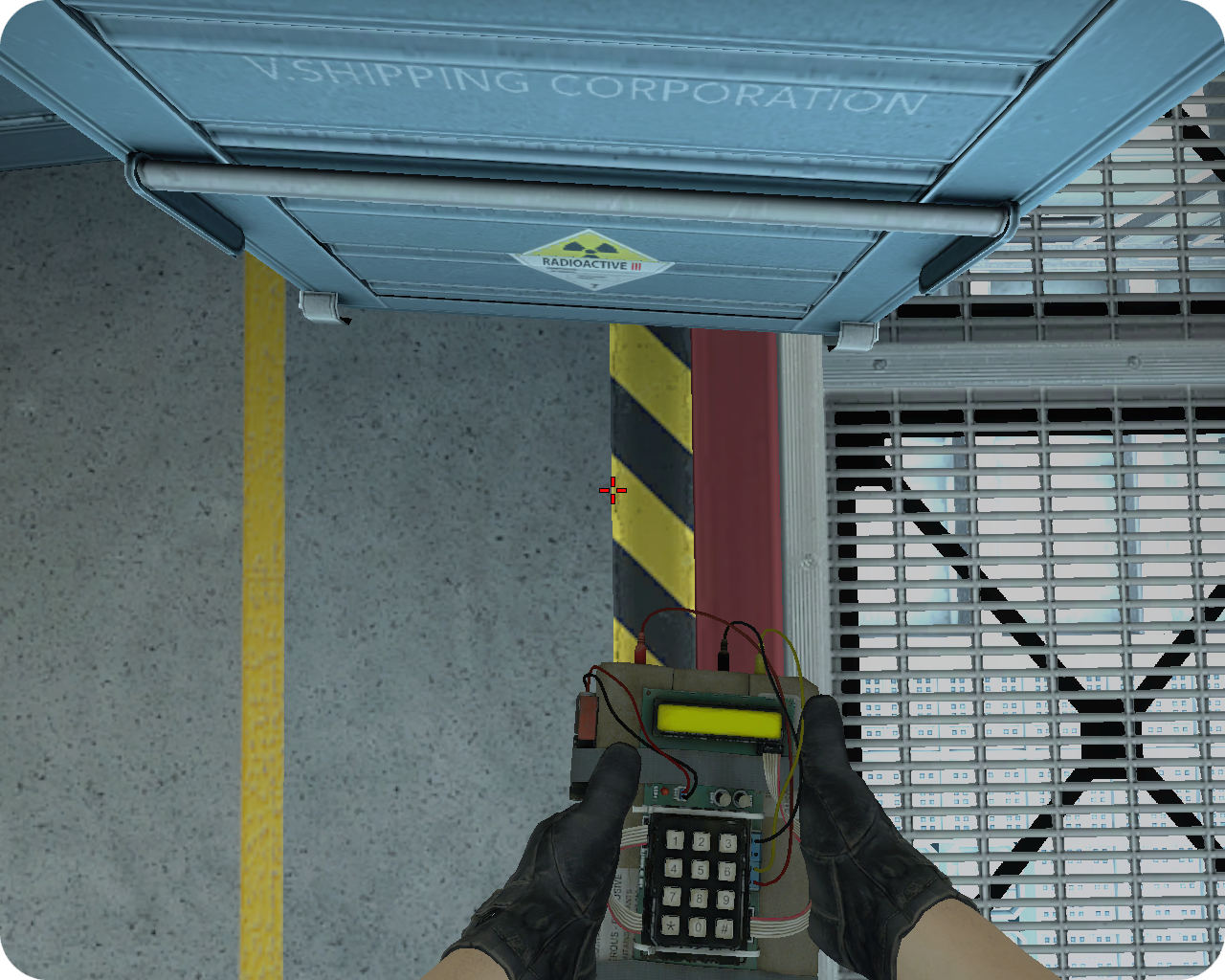 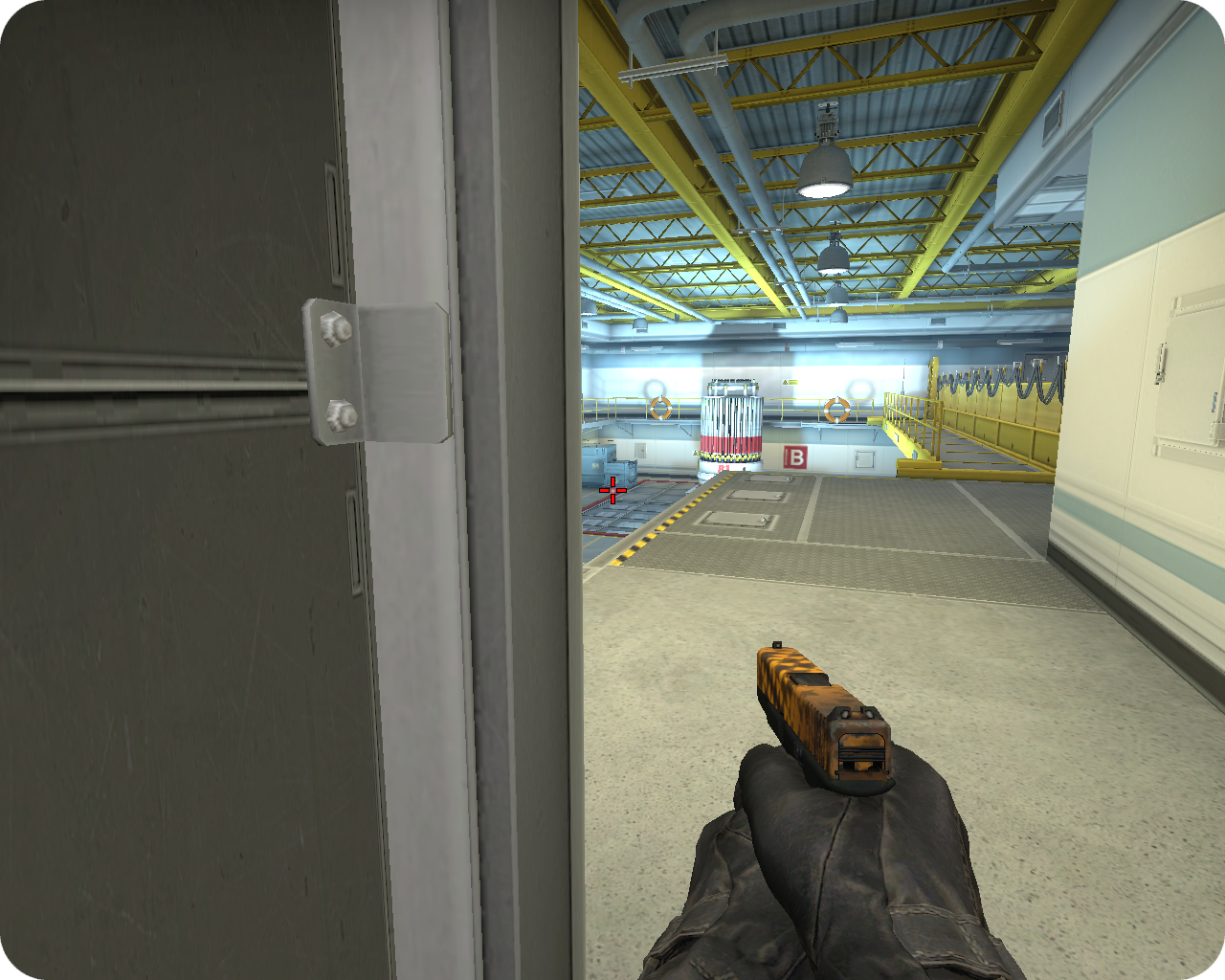 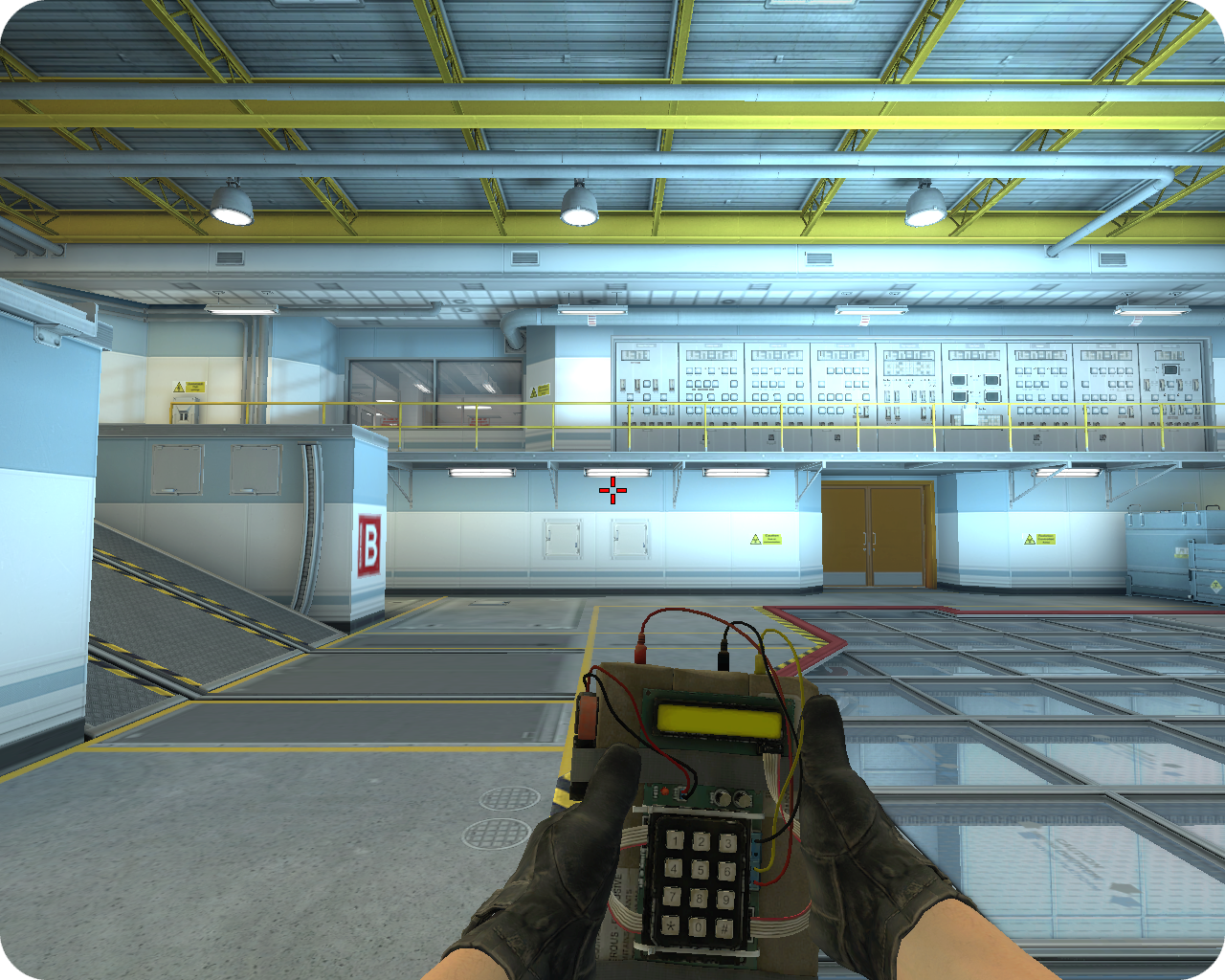 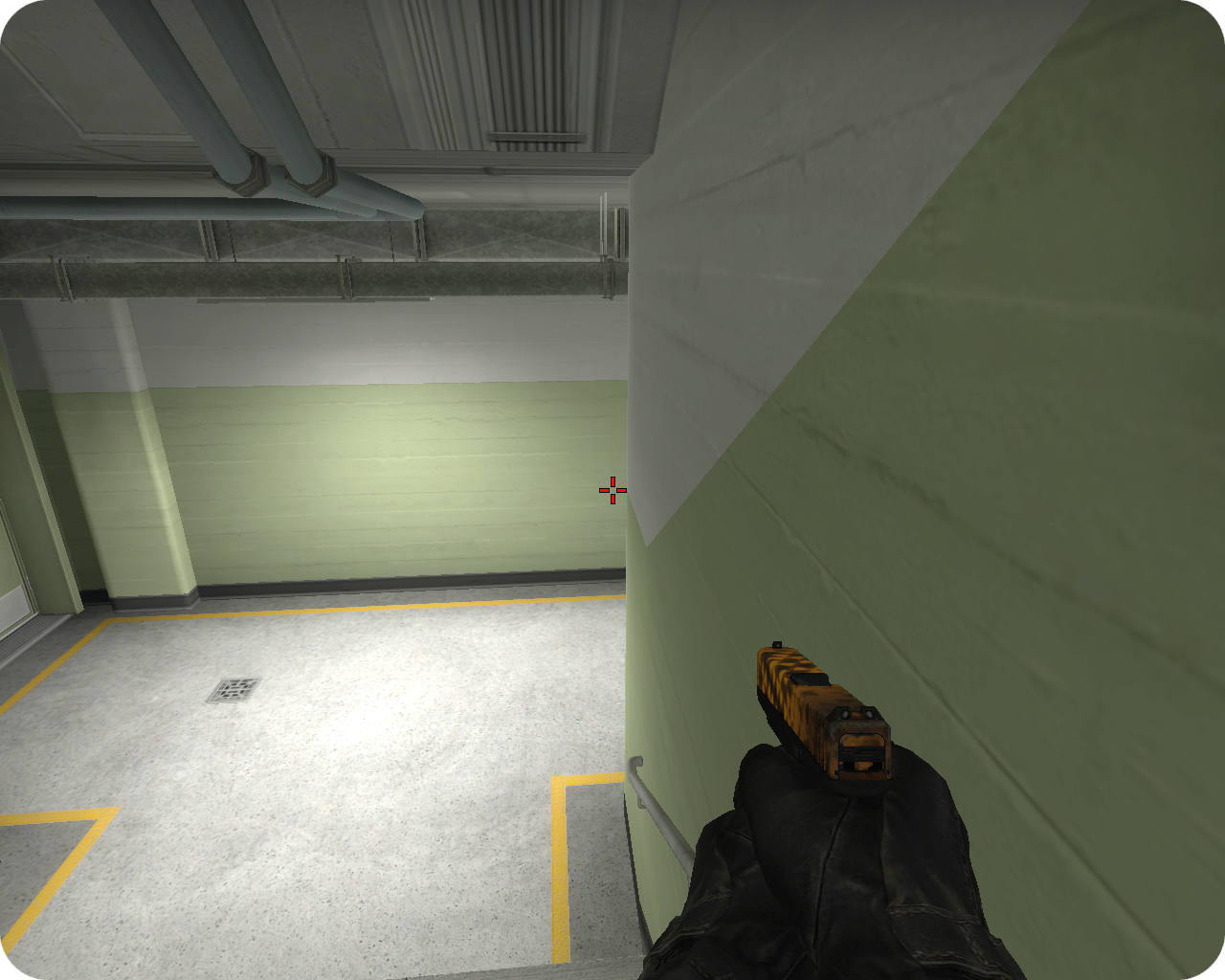 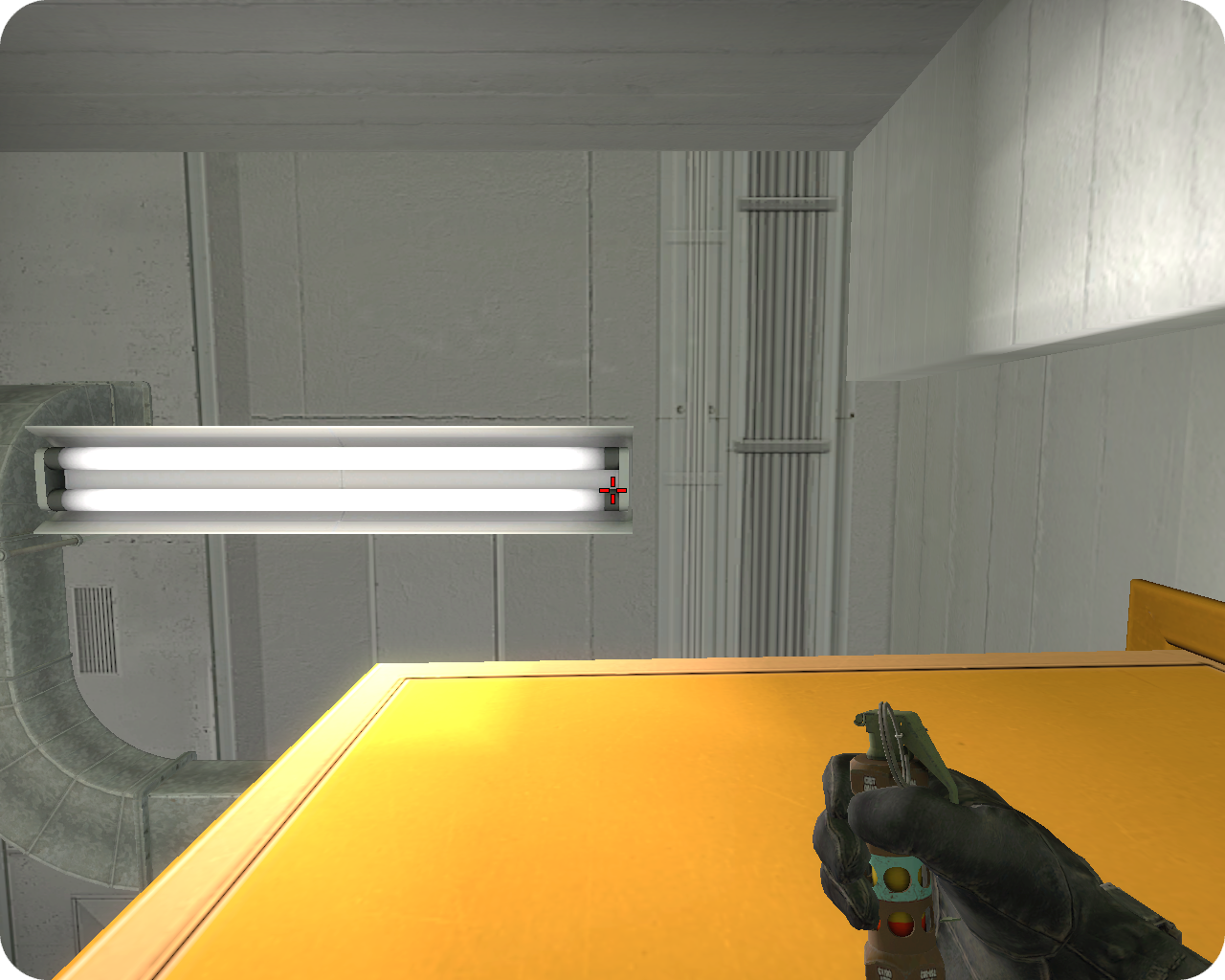 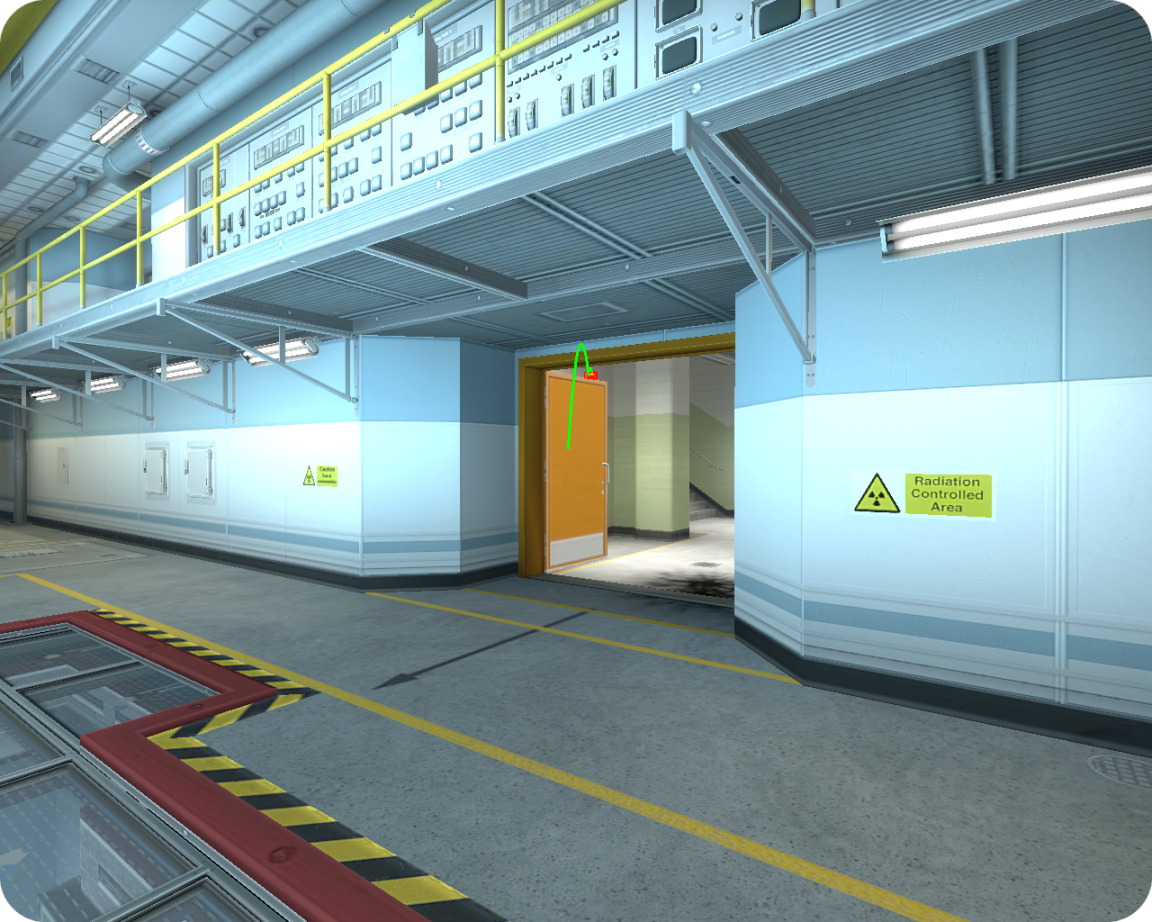 If you play ramp alone throw a molly and pull the pin of a HE.
If the Ts extinguish the molly throw the HE immediately, if not, then wait for the end of the molly and run throw the HE against the slant.
In general, if you are faced with lots of pressure you should not go for more than one kill, but fall back down to B and communicate this to your team.
Then a teammate has to passively cover hell to prevent the Ts from going heaven while all others can help you on B.
If you play ramp in pairs do the same HE/molly combo, but in case of a rush the second player can throw another molly in front of the smoke which the Ts used to extinguish the first molly.
That way the rushing Ts are hit by your HE and run into a molly.
Alternatively, boost your mate on top of the boxes while the first molly is burning.
(Be aware that you can only boost on the thick boxes where only two are stacked!) Then you can wait out a rush and if there is none you can help somewhere else with your mate staying boosted.
The ramp player needs lots of patience and should not leave ramp unless the locations of all enemies became apparent or too many CTs died.
Single Ts often try a mid- or late round ramp wrap around and can be very efficient doing this if not stopped.