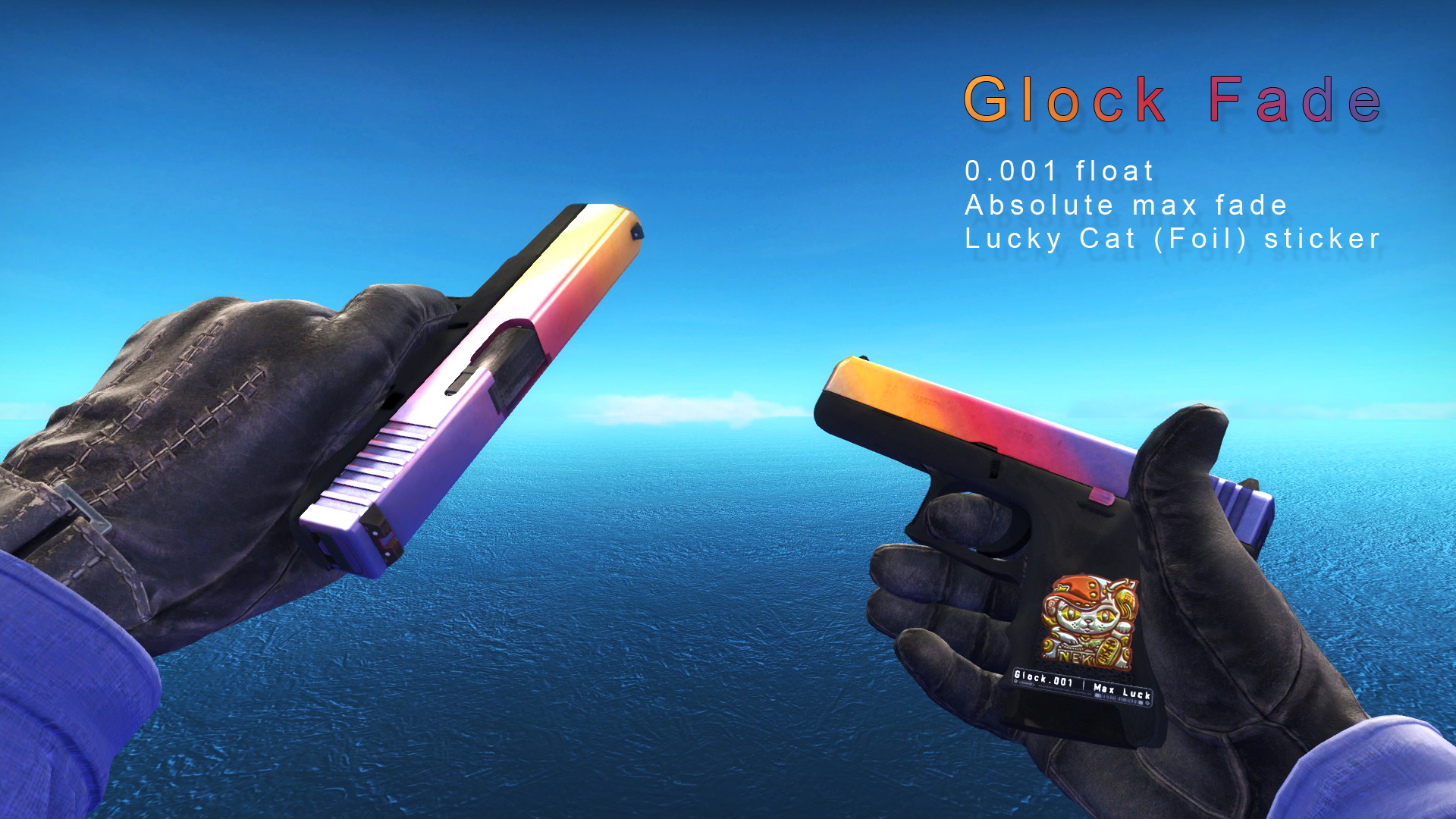 I've found a lot of guides about Fade skins over the internet, espacially knives, but when it comes to the Glock Fade, guides I've found they seem to have troubles identifying whatare the real best patterns you can get, and don't explain how to recognize them.
As a result, I've read a lot of bad informations, especially in trade offers on websites like csgolounge[csgolounge.
com] .
You'll see many people stating their Glock is "full fade", "100% fade" or "max fade" when most of the time they are not.
Most of the time they are actually 95% fade, which is already rare and worth more than Market price, but a true full/max fade is really way rarer and if you look for one you'll find a very few of them compared to the 95% ones.

About the terms I'm using: "95% fade", "full fade", "max fade" and "absolute max fade" are the term that I believe are the more accurate to describe valuable fade patterns on Glock.
Some people might use other terms, some people might disagree, but that's not important, in the end the aim of this guide is to help you focus on the actual look of a Glock Fade to know how really rare it is, no matter how it is called.
Any pattern not seen on this page must be considered a common pattern.
If you see someone adertising his Glock as a full, 100% or max when it isn't, don't try to force him to tell differently, just post something generic like "You might call your Glock [insert term here] but it's actually not the max fade you can get" and join a link to this guide, so anybody will be able to aquire knoledge and make an advised opinion.
About general patterns values: Since I'm trading I've seen people wondering why a pattern should be more valuable than another depending on its look or float, and in some rare cases a genuine hate towards people who do, so I felt it was important to add this disclaimer section.
First of all remember CS:GO is just a game, but as skins involve money, just like in real life, anthusiasts and collectors will value more the rarest patterns for a given skin.
It is true for Doppler phases, it is true for wear on a M4 Asiimov, it is true for fade percentage on a knife.
.
.
it is true for many skins, and so it is for a Glock Fade! With few exceptions, a given skin costs more in Factory New more than in Minimal Wear, which costs more that in Field-Tested, etc, because it looks better and is rarer.
.
.
and it's exactly the same for a rarer and/or better looking pattern, or an unusually low float that affects the look.
Also, keep in mind that the Glock Fade is part of the Assault Collection which is no more available, and number of CSGO players by the time it dropped was very little compared to now, that means there are really few Glock Fades comparing to the amount of players.
That explains why its price is so high and keeps rising, and that explains why any collector would overpay to have the best possible pattern.
You are free to think what you want, so if you don't value a particular item the same way another player does (some consider the float, the pattern, the stickers, etc) don't waste your time, just pass your way and find yourself another offer, there are tons of them.
This told, let's go back to why we're here!

Well, there's actually a not that hard to check the real fade amount of your high-tier Glock.
Just look at the lever on the side of the gun.
The amount of purple reaching it will tell you the fade pattern, as following: 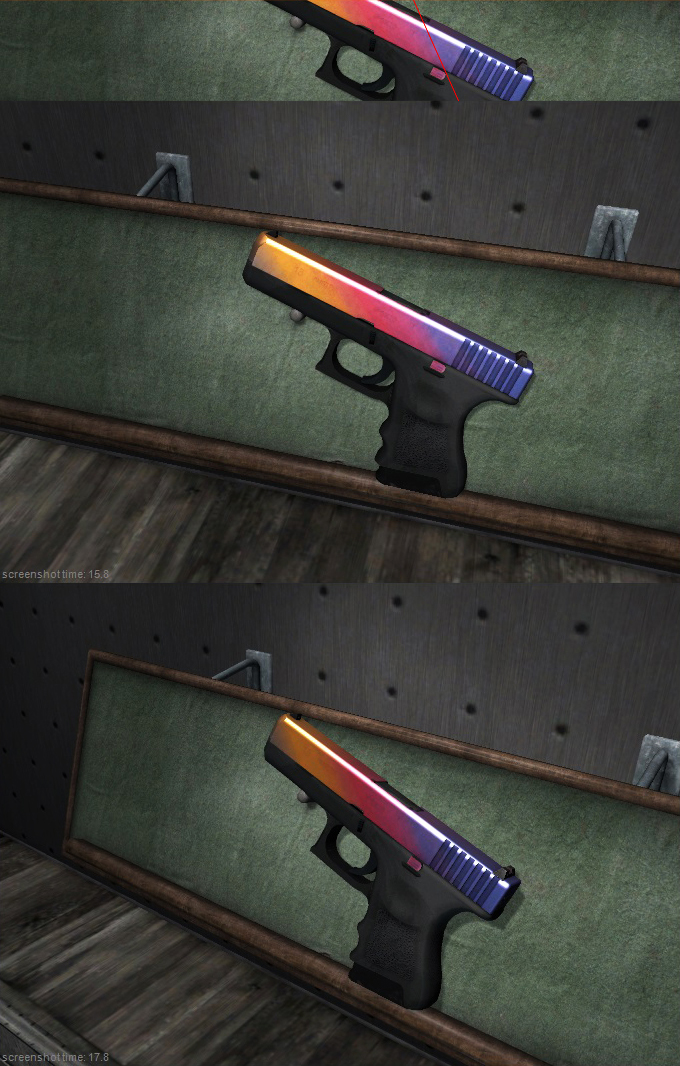 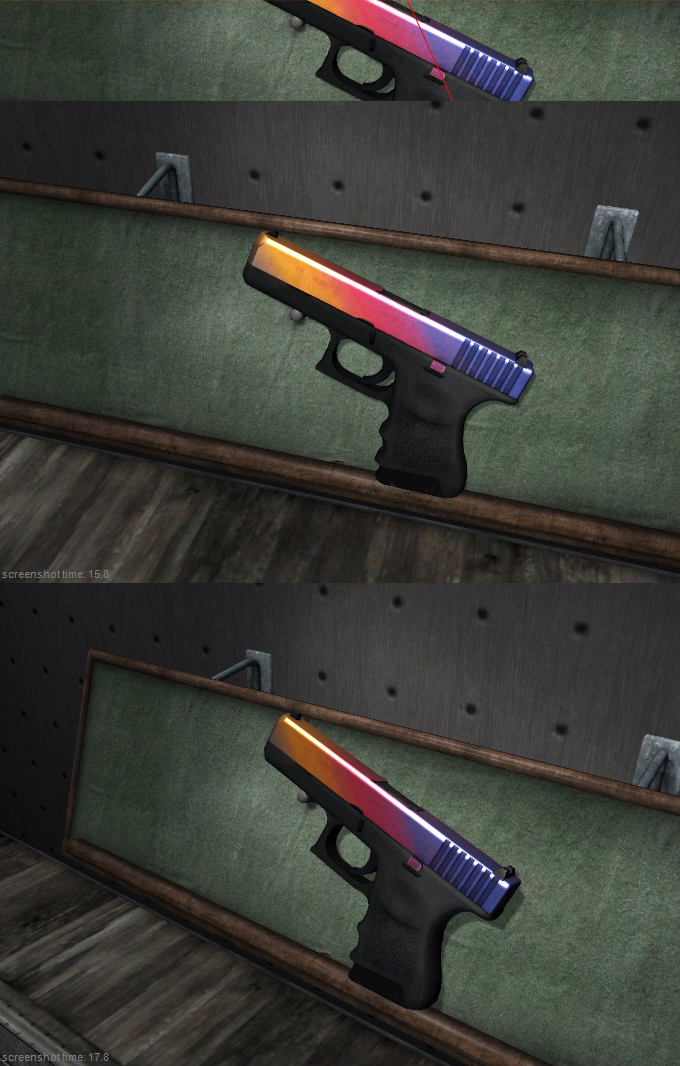 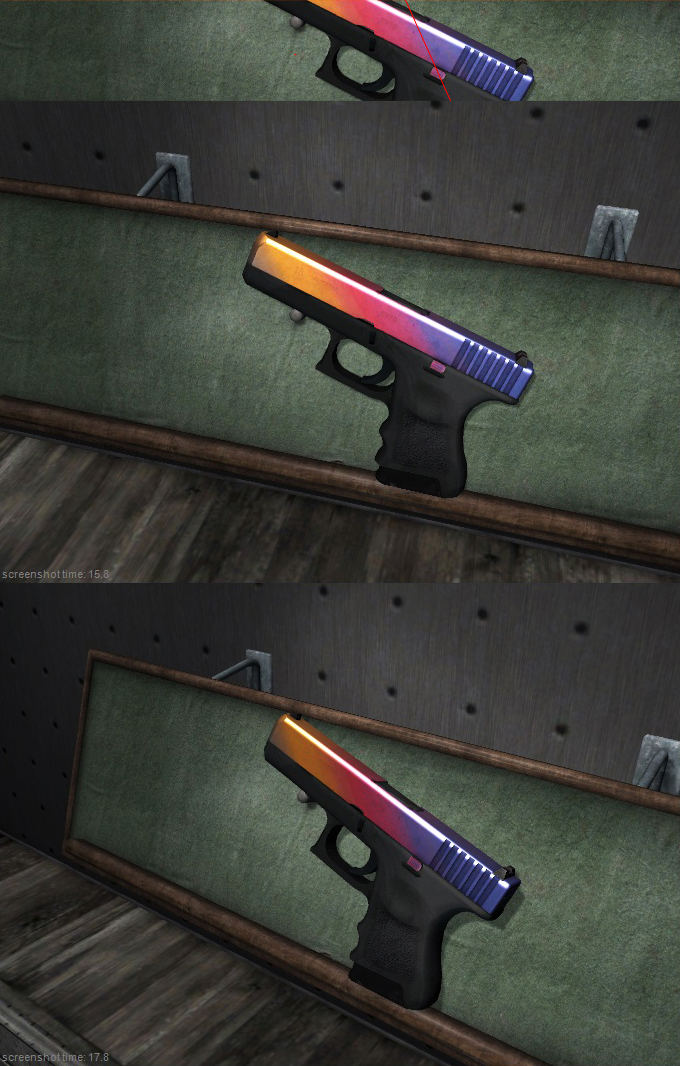 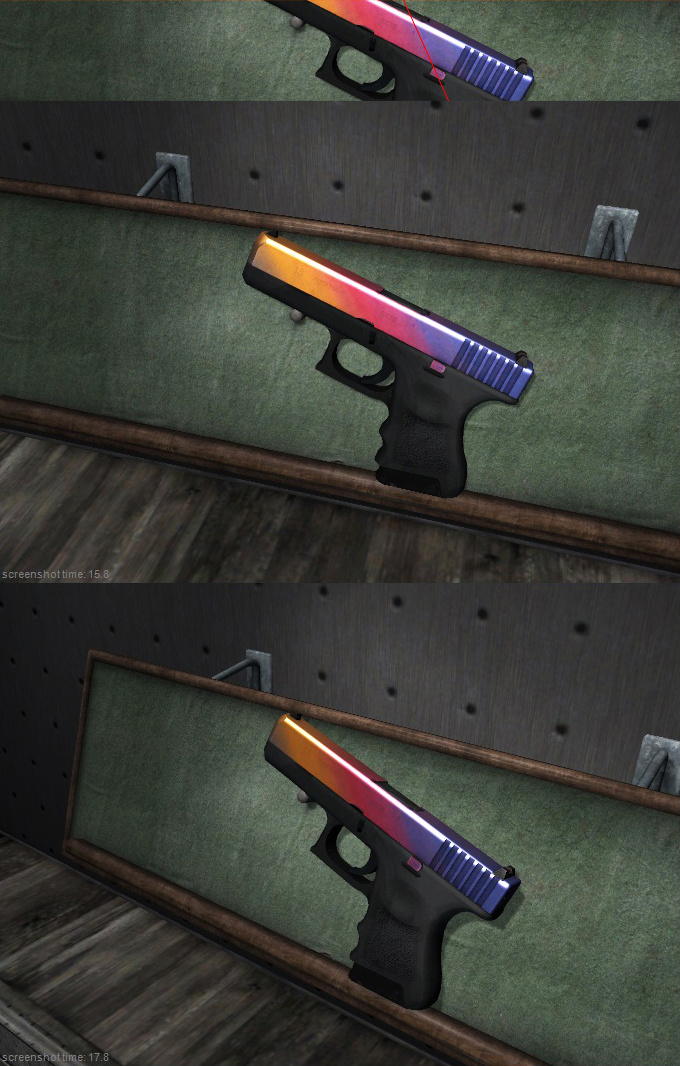 Well, that's pretty much all you'll have to know about the Glock Fade! Other percentages of fade are less important that on knives, even if the more faded it is the better it is, the real rare patterns people look after are these.
Remember Glock starts at 70% when there is almost no purple on it.
Also, notice that float value doesn't affect the Glock's look very much, it will only damage the paint on the very tip of the gun and vanish a bit the colors, but nothing noticable in-game.
Nevertheless, very low floats (under 0.
01) will still make the skin a lot more valuable for collectors, especialy if you have a combo low float + nice fade! Thanks for reading me, I hope I didn't make too many english mistakes, take a few seconds to rate and comment if you liked or want something to be changed/added, and happy trading! :3

Inspection screenshots taken with metjm[metjm.
net] , a very usefull tool to get accurate screenshots from inspect links.
Special thanks to Indie from csgoxchange[csgoxchange.
com] who featured my guide in theirs, be sure to check out this awesome website to learn a lot about skins and rare patterns!