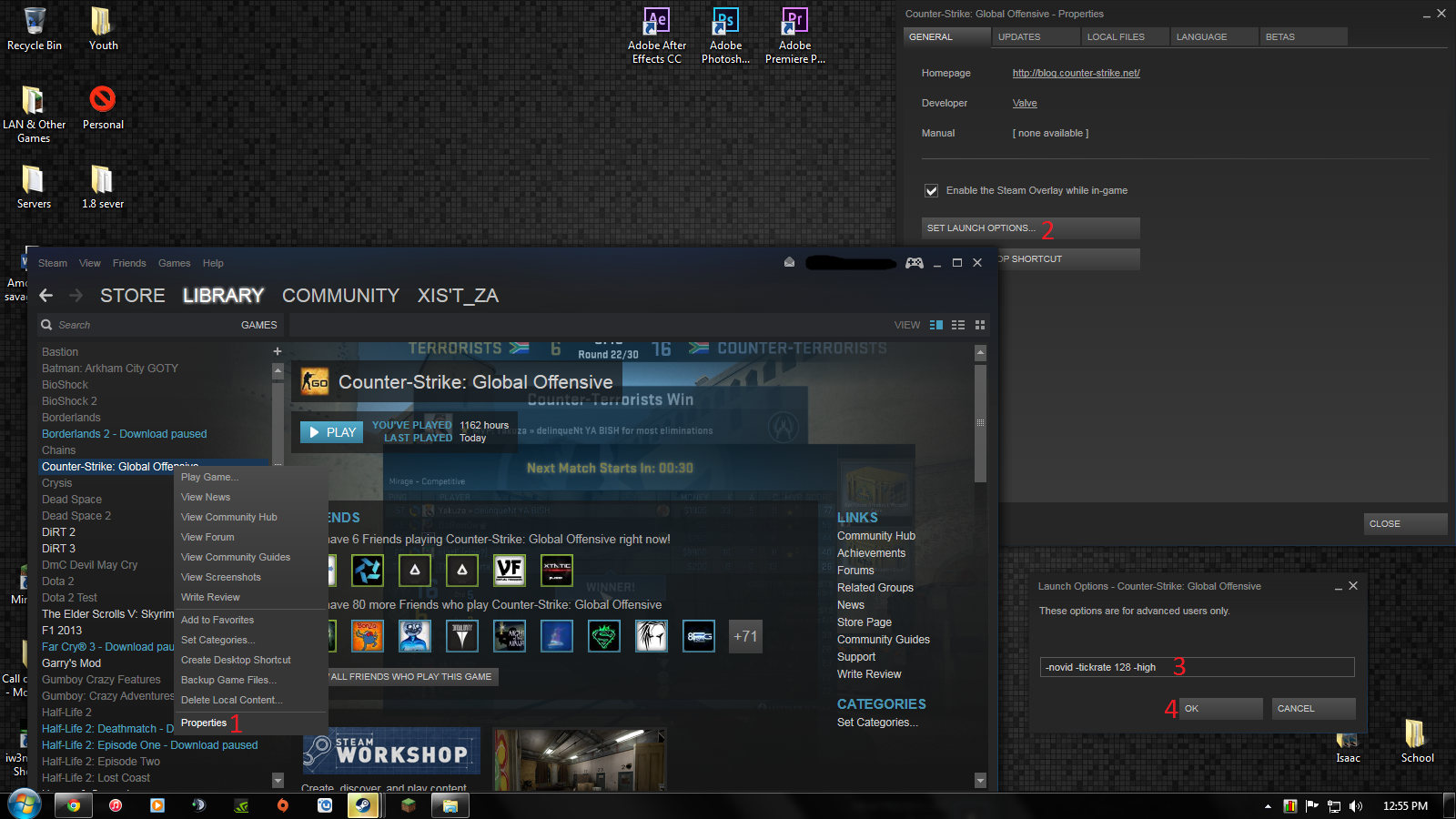 How To Get To Your CS:GO Options?

-console Setting this launch option will open the console automatically when opening the game.
There is no real need to set this launch option in CS:GO, because you can just set a toggle key in your ingame options or your autoexec and, unlike CS:S, the toggle key actually works.
Some people still like to set this launch option, so they are able to see echos they put in their autoexec and know that the autoexec was executed properly.
-novid Starting the game with this launch option will remove the Valve intro that normally plays at the beginning.
A must-have launch option in my opinion, because I find that intro is annoying as hell.
-tickrate 128 If you create an offline game with bots without this launch option set, the created server will run at tickrate 64.
If this launch option is set, the offline servers will always run at tickrate 128.
-refresh <rate> / -refreshrate <rate> / -freq <rate> You can force your monitor to run at a specific refresh rate with this launch option.
This only makes sense if your monitors maximum refreshrate is higher than 60.
If it isn’t and you set this launch option to 120, you can seriously damage your monitor.
-high This will start the game in high-priority mode.
This launch option can help players with lower-end computers to get less lag and a few more fps, but it is not a guarantee.
Test this launch option, if you don’t notice any improvement performance-wise, remove this launch option again.
-threads <number of cores/threads> So far, I was not able to find a definitive information about the maximum number of threads that CS:GO uses and if this launchoption makes any sense.
If you have a CPU with 4 or more cores, you can try to set -threads to the number of cores (or number of threads if you own a CPU with 2 threads/core) you have, but right now I can not guarantee that your performance will improve.
Test it, if you don’t notice any difference or your performance is actually worse, remove the launchoption again.
-full / -fullscreen This launch option forces the game to run in fullscreen mode.
The game will ignore this launch option, if -windowed / -window / -sw / -startwindowed option is also set.
-windowed / -window / -sw / -startwindowed This will force the game to run in windowed mode.
Should not be set without -w and -h also being specified.
The game will ignore this launch option, if -full / -fullscreen option is also set.
-w <width> / -width <width> -h <height> / -height <height> This forces the game to start with the resolution you specified, e.
g.
-w 1920 -h 1080.
-noborder Using this launch option will remove the border that Windows puts around the window when the game is run in windowed mode.
-x <position> – horizontal -y <position> – vertical When the game is run with no border, you can’t move the window around and it is stuck to the center of your screen.
You can define the position of the window with these 2 launch options.
<position> is the space in pixels, that you want the game to be “away” from the left and top side of the screen.
-lv Ok, this isn’t really a useful launch option, but if you’re bored, just set it, play a bit and have a good laugh.
The -lv launch option turns the game into a low violence version.
The previous Counter-Strike Games had to be low violence versions over here in Germany while CS:GO doesn’t, but the animations are still there.
There’s no blood and models lie down with their hands behind their heads.
-language english If you want to use CS:GO in English but use the Steam client in a different language, you can use this launch option.
You can also right-click CS:GO in your game library, go to properties and set the in-game language there, but that doesn’t work for some people.
Other languages should work too for this launch option, but I did not test thatHere are some launch options that either do not work or that really shouldn’t be used in CS:GO (Many people still use them and falsely recommend them): -noforcemaccel -noforcemparms -noforcemspd These launch options have absolutely no effect in CS:GO.
Use m_rawinput 1 and m_customaccel 0 instead.
Or don’t, since it’s creating input lag for some people.
Test a bit and use the settings you’re most comfortable with.
-heapsize <kilobytes> You should not use this launch option! This command was removed in CS:S, TF2 and DoD:S in 2010, I’m not 100% sure if it is exists in CS:GO.
Here’s what Valve said in 2010: “This command made sense in Half-Life 1’s memory manager.
The current engine manages memory in a way that doesn’t need it specified.
Under some circumstances, specifying a non-optimal heapsize causes crashes and/or reduced performance” +exec autoexec There has been a problem in CS:GO since the release, that the configs are loaded in a wrong order.
The easiest way to avoid that problem, is adding host_writeconfig at the very end of your autoexec and making sure, that your config isn’t set to read-only.
The command overwrites any cvars in the config.
cfg with the ones in the autoexec.
cfg when the autoexec is executed.
Do not set a launch option +exec autoexec.
cfg, the autoexec is loaded anyway.
+cl_forcepreload 1 Basically what it does is it Pre-loads all your maps (map loading may take a little longer) but at the cost of gaing a few more FPS.
Thanks Shampo0o For suggesting it! -noaafonts Disables anti-aliasing with fonts for slightly more FPS.
& -nod3d9ex Disabled DirectX DXLevel9 extension which can increase FPS.
Thanks Shampo0o For suggesting it!