There was a time when VALVe used to duplicate items for users who had their accounts hijacked or items scammed under special circumstances, which they stopped doing about a year ago.
Dupers would typically take advantage of a serious loophole relating to this, and once caught, would be typically trade banned.
Although VALVe officially stated they wouldn't be removing duplicate items, scammers took advantage of the circumstances regarding item duplications, adding more terms such as "bugged" or "glitched", to make it sound like a more serious matter.

A scammer would create a profile, and then co-operate with another scammer, or using an alt to impersonate a trusted middleman, and randomly target a victim with high value items, claiming to be interested in buying said item, and state that the middleman they will be using will "verify" both user's items.
Some clever scammers will appear to be running some form of "item checker" app to appear more legitimiate, but the "In Non-Steam Game" status makes it obvious it isn't a legitimate item checker as any executable can be added as a non-steam game.
Occasionally, they'll have a profile set up to appear as a legitimate item checker.
Alternate Method:Some may impersonate VALVe employees and claim that you MUST send them your item to confirm whether it is a BUGGED, DUPED, or GLITCHED item or else you would face a ban (Trade ban, VAC ban, etc).
Another method is that the impersonator directly accuses the trader for owning scammed items, and that they will ban you (Trade ban, VAC ban, etc.
) if they do not surrender their "scammed items".
However, VALVe employees rarely ever need to interfere in trades, and when they do, it is via Steam Support, performed anonymously.
They will NOT add you, or use a STEAM account.
You have to check your STEAM Support Ticket.
Traders who may have inadvertently acquired an item whose previous owner (or the owner prior to the previous owner) obtained it via fraudulent means have nothing to worry about, as these fake "admins/employees" are unable to do anything.
Real employees will do this anonymously and alert you directly via steam support (not via using a steam account, threatening to trade ban/vac ban/ban you) with the following, if the account is reported for committing fraudulent activity: And one of either messages: In addition, there are methods to verify if a person claiming to be a VALVe employee is really a valve employee (read the Valve Employees section on this guide).
Overall:Once the victim submits the items that the scammer wants to "check", it's bye bye, and they'll simply run off with the items Should a player refuse, the scammer will threaten the user into submission by stating they will ban them (VAC Ban, Trade Ban, etc.
) if they do not send them their items.
Keep in mind, THEY ARE UNABLE TO DO SO, NO MATTER WHAT THEY CLAIM THEY CAN DO! 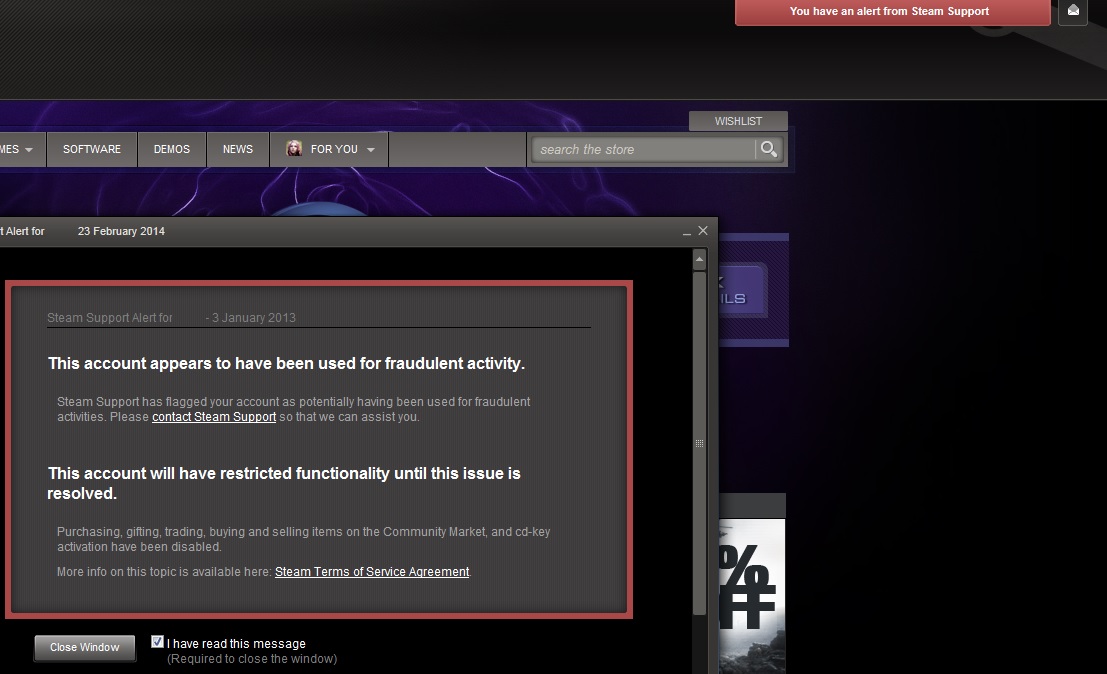 These are the following RED flags to look out for: Their profile info mentions the need to have your items "checked", "cleaned", "cleansed" or "verified" for "bugged", "illegal", or "glitched" items.
Alternatively, they may state you will have to send your items first, before they will send you their items.
They may use a fake "Negotiating" account impersonating a high profile trader.
They will almost always want you to send your items first, so that they can scam you, using every known excuse documented.
The interested trader states you need to send your item to their "middleman" or to a "trusted friend" (in reality, someone impersonating someone on your friends list) to "verify/check/cleanse/clean" your items because they claim said items would "vanish" once traded in.
The "middleman" of choice claims to be a SteamValve employee, Steam Admin, or Steam Employee, or claims to be a VALVe employee, but lacks the employee-only badge and isn't a member of the employee-only group.
The "middleman" of choice, may try to run some form of "Item Checker" application (e.
g STEAM SUPPORT ITEM CHECKER, SteamValve Item Checker, STEAM Database | Item Checker) The profile is made to appear as an "item checker".
They will threaten to "ban" you for refusing to send them your items first (VAC Ban, Trade Ban, etc.
).
Note that they cannot do this, no matter what they tell you.

Item verification is a scam! Illegal, fake, or glitched items do NOT EXIST, NO MATTER HOW HARD THEY TRY TO CONVINCE YOU!!!!! It's just a ruse to steal your items.
They primarily target inexperienced traders.