Counter-Terrorist: Whether on CT or T side, it’s crucial to make the most of your money and spend as much of that $800 as possible.
On CT it’s a very good idea for one or two players to buy a defuse kit along with some grenades.
If two players grab a kit, one should be near each site.
Armour is great to counter the T’s Glocks but having one or two players with Smokes and Flashes is also a good idea to counter pushes.
Here's a really good example of a CT pistol round buy: Terrorist: There are quite a few variations of buying on T side.
It’s not uncommon to have three to four players buying armour while one or two buy a smoke and two flashes and they all charge onto the site.
Another strategy that has emerged thanks to the current power of the Tec-9 is one buying armour, whilst another one buys that player a Tec-9 and a Smoke for themselves.
Remember, if you’ve thrown your smokes and flashes and have no armour it’s a good idea for you to be the one pushing.
You’re expendable now.
And the guys with armour and Tec-9s can walk over your corpse, and the corpses of the enemy team.
Here are two good examples: 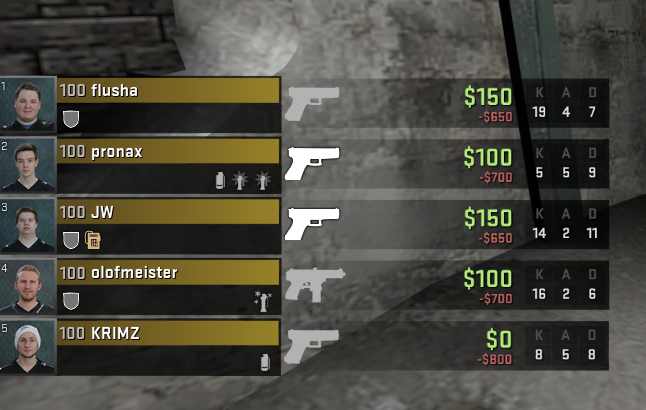 Counter-Terrorist: Congratulations on winning the pistol round.
Now this next buy can be tricky and is often shaped off whether the Ts got a bomb plant.
If the Terrorist managed to get a plant, there's a good chance they'll be full buying on the 3rd round.
If you don't prepare they can easily be better equipped than you.
That's why it's a good idea to have only one player opt for an SMG/Shotgun if the Terrorists did plant on the pistol round.
If they didn't get a plant, feel free to have one more player go for a cheaper weapon to build up the cash.
Finally, remember to buy helmets on this second round, even if you have armour already.
You don’t want to lose your M4 to a Glock.
Here's an example of a 2nd round buy: Terrorist: Good job on defeating the infidels! Now so long as you win the next round, the CTs won’t be able to do a full buy till the 4th round.
Similar rules apply to Ts as they do to CTs after a pistol round win.
Only one or two players should purchase SMGs or keep only their pistols on them.
It’s fairly common now to have two players just using their Tec-9s.
It’s also important to decide whether to buy an AK47 or opt for a cheaper weapon, and this is mostly dependent on your money situation and whether you have to re-buy a full price armor/helmet.
Here's a great example of the buy: 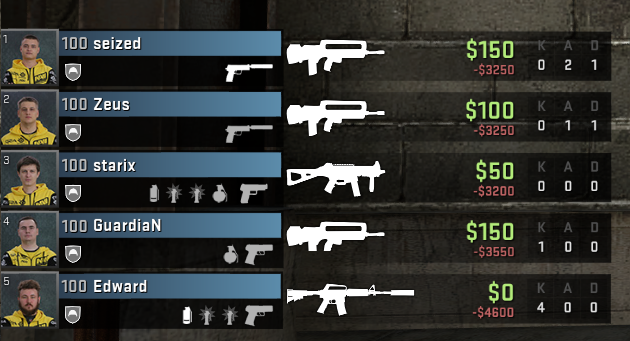 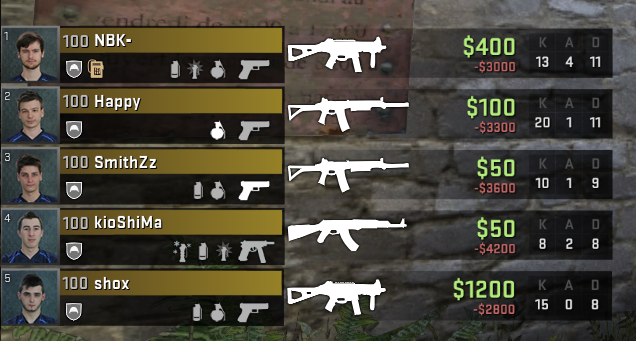 Counter-Terrorist So you've lost the pistol round as a CT.
You're now in a tough situation where you cannot buy till the 4th round as there’s no bomb plant to save you.
This is why almost every professional team force buys on the 2nd round after a loss.
With the Blue Shell Effect, you will end up buying on the 4th round regardless of whether you force buy or not.
If you're unaware of what the Blue Shell Effect is it's simply the increasing amount of money you receive after multiple losses.
Here are some reason why you should always force buy after a pistol round loss as a CT: -Damage to the Terrorist's economy -Better chance to steal some weapons -You'll still be able to do a full buy on the 4th round -The Terrorist will often buy SMGs not suspecting armor/helmet -The surprise -And you can win it! So here’s the question.
What should be bought on a force buy? Naturally a good Pistol + Armour/Helmet set up is a good option, one or perhaps two team mates can opt for a Scout or a Nova instead.
Here's a great force buy from NaVi where one player drops a Scout for another so he has armor/helmet too.
Terrorist: Now the Terrorist side is a little more complex, and whether you force buy after a loss or not depends quite a bit on whether you got the bomb plant.
If you get a plant and do a hard eco you'll be able to do a full buy on the 3rd round.
However, with a plant your money isn't far off what the CTs have and you're in with a good chance to win it.
Here's a good force buy after a plant: If you don't get the plant, chances are you won't be doing a full buy till the 4th round anyway so it's a good idea to do a force buy.
The only reason not to is that if you're positive you can get a plant - though it's very tricky without armor and nades.
Here's a great 2nd round force buy: 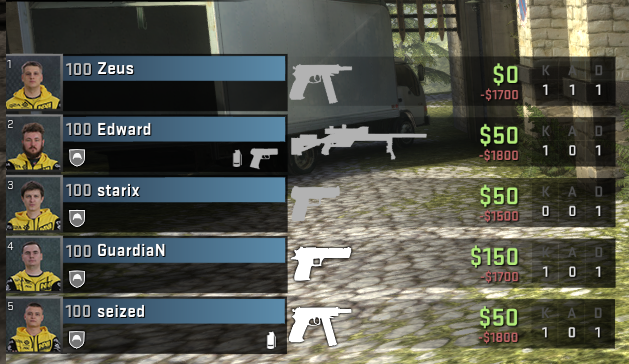 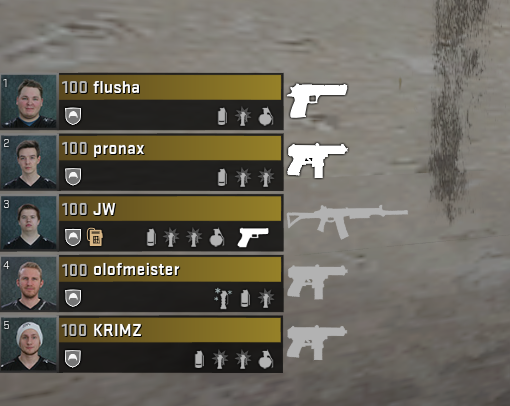 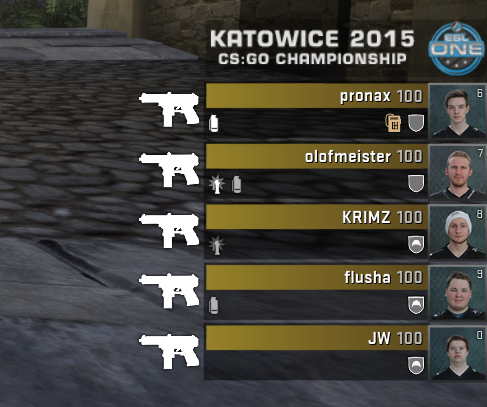 Counter-Terrorist: Now it’s time for the real deal.
If you have enough money, and suspect the Ts are doing a full buy, you should have a full buy too.
This is a very simple buy if you’re rich, but can be tricky if you’re sitting around the $4000-$5000 mark, so deciding the order of importance is a must.
CT side is expensive, but some cuts can be made to make it far cheaper.
A full team of M4s with an AWP or two is ideal, but if one or two players can’t afford a M4, they can opt for a Famas instead.
Another saving can come from only buying Armour and not a Helmet if you suspect the Ts are fully bought with AK47s and AWPs as they will be a one shot headshot regardless.
It’s also not crucial to buy a full set of grenades.
Smokes are very important and your team should have five ideally, but incendiaries are often more expensive than useful.
Lastly, buying 5 defuse kits isn’t always necessary as just two kits if used by players playing on each site can be enough.
Here are some great examples - minus the lack of kits: Terrorist: Thankfully, everything’s far cheaper being a Terrorist.
Ideally everyone but the AWPer should have an AK47, but one – maybe two – players opting for a Galil or Tec-9 so they can afford nades can be a good idea.
Remember, you can also pick up an AK-47 off your dead buddy.
Unlike CTs, helmets are almost a must for Ts but that’s really the only downside.
Here are good cheap examples: 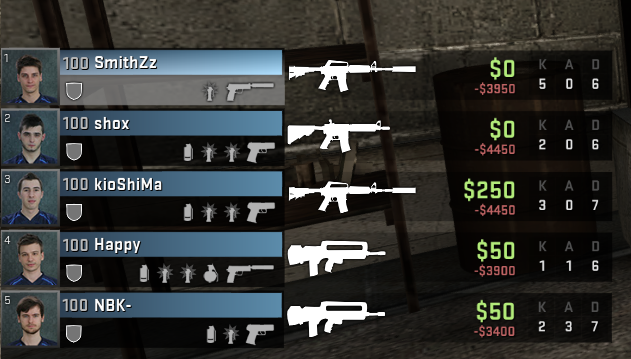 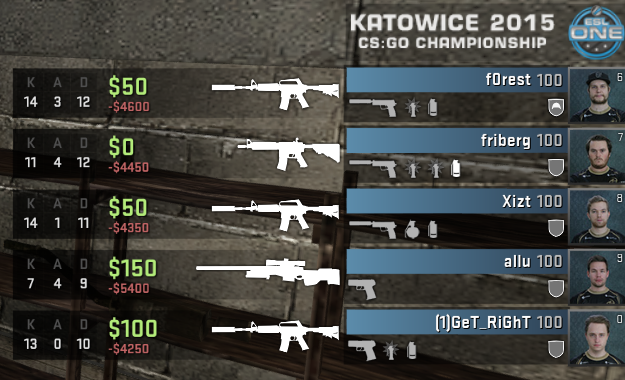 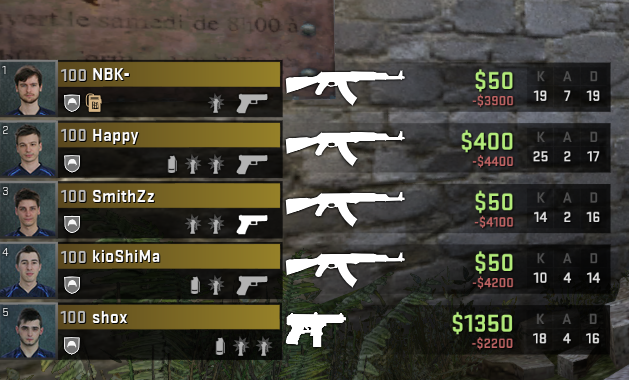 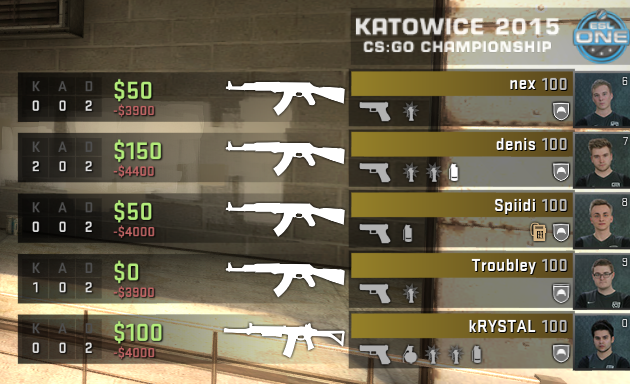 This is as simple as it gets.
All that's involved is spending as little as possible so that you can afford a full buy the following round.
Remember that thanks to the Blue Shell Effect you should never have to do two hard ecos in a row.
Buying a P250 or a Smoke is a good idea if you have a little extra money and a single kill will get you your $300 back! Here's a nice hard eco: 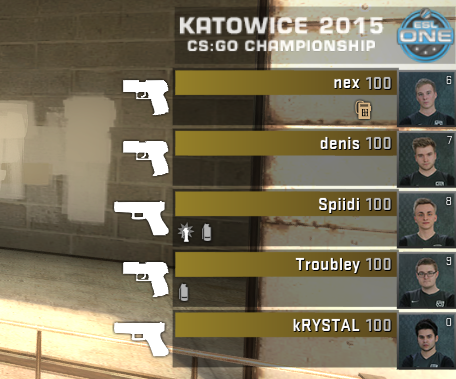 This applies to both Counter-Terrorists and Terrorists.
If your team lacks enough money this round, but will have more than enough money the following round thanks to the blue shell effect, it’s a good idea to do light buy.
This greatly increases your chance of winning the round.
Just buy enough so that regardless of whether you get some kills or a plant, you'll still be able to pull off a great full buy the following round.
Here's a good example: 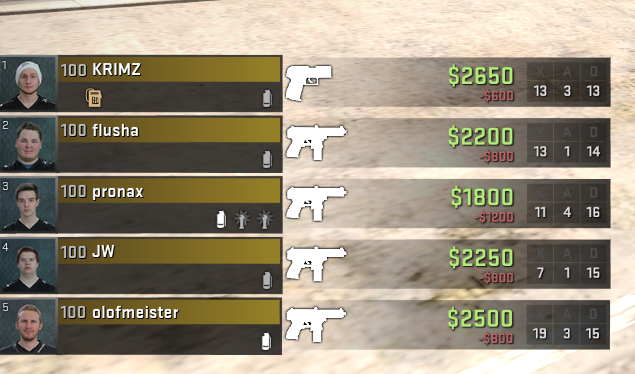 On CT side, if the bomb’s down with no chance of defusing it, or you’re in a very tough clutch situation it’s a good idea to save.
This is trickier for Ts however as if you die after the round time is over, you’re screwed.
When saving only go for exit frags if you’re in a good position, you don’t desperately need to keep your weapon and if it’s important to do damage to the opponent’s economy.
Otherwise stay alive at all costs! If your team manages to save a gun or two, but the rest of your team can’t buy, the team can either force it if they suspect the other team isn't well equipped, or do some damage with the guns and hold onto them for one more round.
If your team does force it, spread the love with the guns.
One or two saving players is often enough to get a full buy going on the next round.
Here's an example of that: 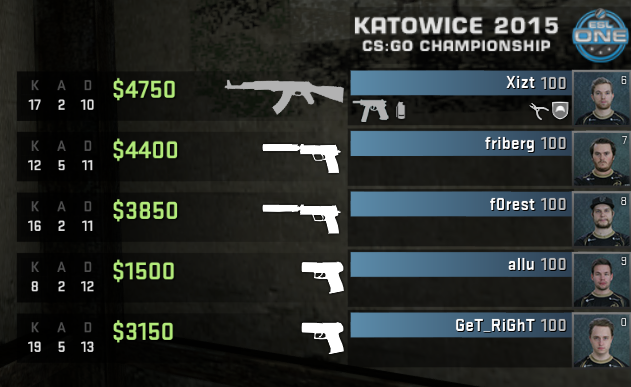 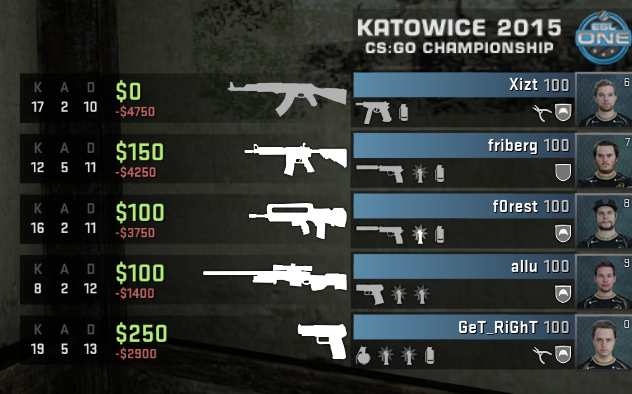 Your money is not your own.
It’s your team’s money.
If your teammate can afford an AK47 and Armour/Helmet but no nades to go with it and you have plenty of money, buy the AK47 for them.
If you’re on CT side always pick up AK47s if you don’t need an AWP.
Someone on your team is bound to prefer the AK47 over the M4 and will be happy to buy an M4 for you.
A useful strategy is that if your team has to hard eco and one player has more money, have him or her buy some pistols for the team.
It’s a team game.
Buy as a team.
Unless you have KennyS on your team.
Then just get that guy an AWP every round you can.
Best of luck! If you enjoyed this guide give it a rating, a favourite and feel free to share it with your friends.
Feedback is always welcomed.